The Battle of Carthage, also known as the Battle of Dry Fork, took place at the beginning of 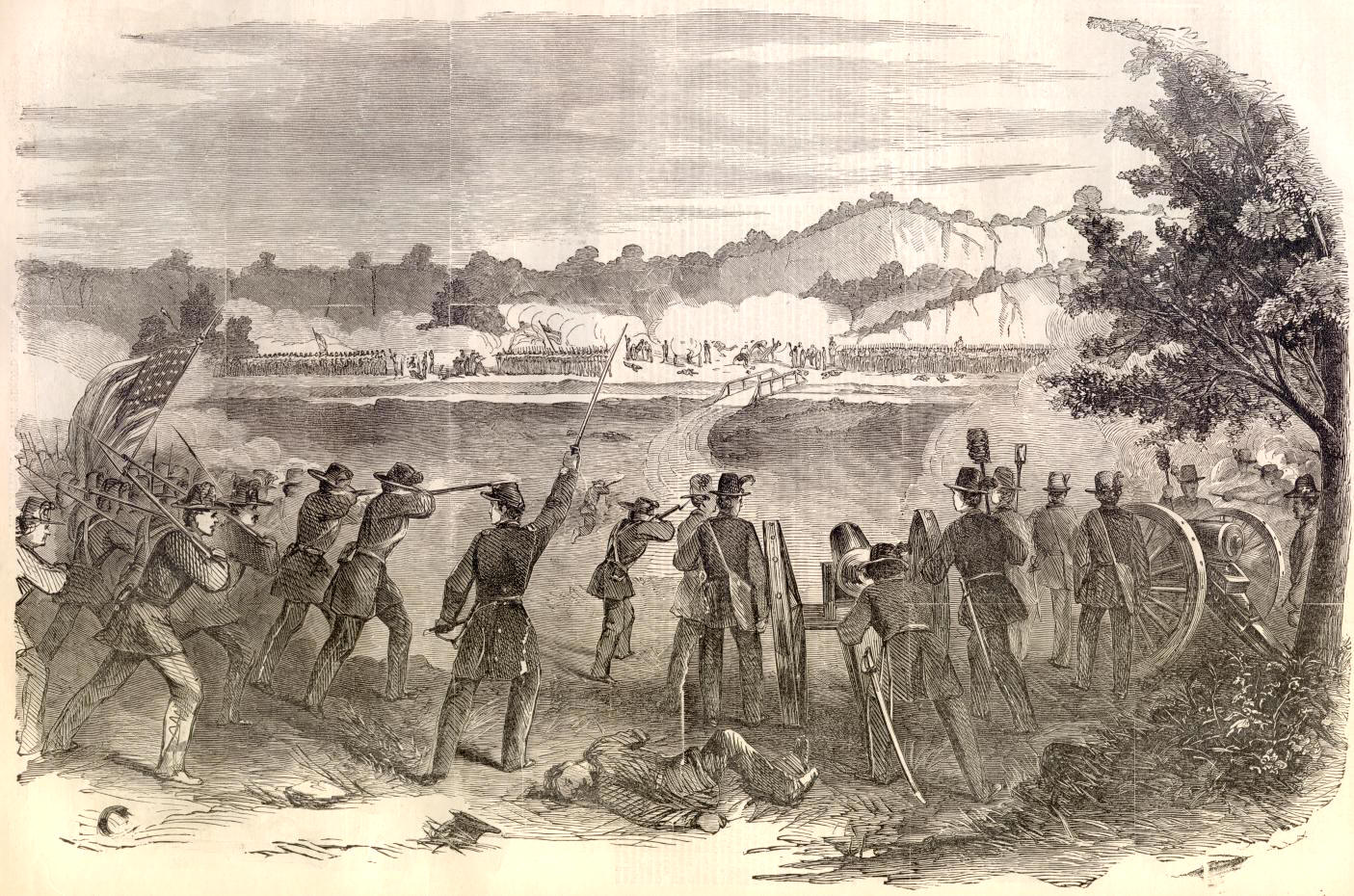 the American Civil War on July 5, 1861, in Jasper County, Missouri. The experienced Colonel Franz Sigel commanded 1,100 Federal soldiers intent on keeping Missouri within the Union. The Missouri State Guard was commanded by Governor Claiborne F. Jackson himself and numbered over 4,000 soldiers led by a hero of Mexico, Sterling Price, along with 2,000 unarmed troops who did not participate in the battle. The battle was a strategic victory by the Missouri State Guard in large part owing to new tactics introduced on the battlefield by independent partisan rangers serving with Capt. Jo Shelby.[2] Carthage played a part in determining Missouri’s course during the war, as it helped spark recruitment for the Southern regiments[citation needed].

Political views in Missouri were divided before the Civil War. St. Louis and its surrounding counties generally sympathized with the Northern states because that region was connected economically with North. The area also had few slaves and contained a large German immigrant population, most of whom opposed slavery. Missouri Governor Claiborne F. Jackson was pro-Southern, and the rest of the state was very heavily divided. Publicly Jackson tried to stay neutral, but he was suspected by the Union men of secretly preparing the state militia to seize the Federal Arsenal in St. Louis.

In April 1861, after the firing on Fort Sumter, President Abraham Lincoln called for troops from all of the states to defeat the Confederacy. Missouri was asked to send four regiments. Governor Jackson refused the request. Instead, he called up the Missouri State Militia, possibly to seize the St. Louis Arsenal. If this was his intention, it was thwarted by the newly appointed commander of the arsenal, Captain Nathaniel Lyon of the 2nd U. S. Infantry.

Lyon was had previously been stationed in Kansas Territory and had developed well known abolitionist views. Arriving in February 1861, Lyon quickly became associated with the “Unconditional Unionist” faction in St. Louis. Lyon, like many St. Louis Unionists feared that Governor Jackson would employ the city’s secessionist Minutemen paramilitary organization and the local Missouri Volunteer Militia to capture the Arsenal. Beginning on April 22, 1861, on the orders of President Abraham Lincoln, Lyon mustered in four regiments of Federal Missouri Volunteers (mostly former members of Republican Party Wide Awake marching clubs), issuing them weapons drawn form the Arsenal stocks.[3] Lincoln followed up with orders to remove the majority of the Arsenal’s remaining weapons to Illinois, a transfer which was made secretly on the night of 25–25 April 1861.

The crisis grew worse when a shipment of Confederate siege artillery arrived at the state Militia encampment, Camp Jackson, on May 8–9, 1861. Confronted with (what he considered) clear proof of treasonous plotting at Camp Jackson, Lyon marched a force of Federal regulars and his new Missouri Volunteers to the camp to arrest the militia. He then surrounded the state militia’s camp, forced them to surrender, and unwisely started from there and marched them as prisoners through St. Louis, inadvertently inciting a deadly riot (the Camp Jackson Affair.) The action drew great protests from Missourians, and even representatives of the City of St. Louis petitioned Lincoln for Lyon’s dismissal. However, Lyon’s action was supported by most of St. Louis’ Unconditional Unionists, including Congressman Francis P. Blair, Jr., brother to Lincoln’s Postmaster General Montgomery Blair. The Blair brothers arranged for Lyon’s promotion to brigadier general. Continued Unconditional Unionist concerns over the accommodation of state authorities by Gen. William S. Harney, commander of the Department of the West lead to Harney’s removal on May 31, 1861.

On June 10, 1861, Lyon personally met Governor Jackson at St. Louis’ Planter’s House hotel with Governor Jackson and Missouri State Guard Major General Sterling Price for a last attempt to solve conflicting claims for state and Federal sovereignty. The conference proved futile, with both parties making mutually unacceptable demands. After four hours, Lyon abruptly ended the meeting, and Jackson and Price retreated to Jefferson City, ordering railroad bridges burned behind them. Lyon moved elements of his St. Louis garrison up the Missouri River by steamer to capture the state capital at Jefferson City. Col. Franz Sigel took command of a second element of Federal troops moving from St. Louis into southwest Missouri to cut off Missouri State Guard forces which might retreat south in the face of Lyon’s advance. On June 12 he started to move his First and Second Battalions, along with 5 infantry companies, 2 rifle companies, and an artillery battery towards Springfield.

The Missouri State Guard in Jefferson City retreated to Boonville, where a pivotal skirmish took place on June 17. Lyon quickly took the town and chased the Missouri State Guard south. Due to logistical difficulties, Lyon could not keep up with the retreating Guardsmen. Another group of State Guardsmen in Lexington also moved south under Sterling Price, after learning of the defeat at Boonsville. Sigel’s troops arrived in Springfield and quickly took the town. They prepared to march to Carthage, hoping to catch up with the retreating State Guardsmen. Jackson’s and Prices’s units met in Lamar on July 3 and started to organize. Jackson’s army grew to 6,000 men, a large number of whom joined along the march south. However, the force in Lamar was for the most part armed only with hunting rifles, shotguns, knives, or nothing at all. The next day, July 4, Sigel arrived at Carthage with his 1,100 men.

Learning that Sigel had encamped at Carthage, Governor Jackson took command and made plans to attack the smaller but better armed Union force. On the morning of July 5, Jackson marched his green soldiers south. The rival armies met 10 miles north of Carthage, and the State Guard raised two Confederate stars and bars flags on either side of their line, which stretched over half a mile. Sigel’s men provided an impressive display as they formed a line of battle and moved within 800 yards of the State Guard troops.

Opening the action with his artillery, Sigel closed to the attack. Jackson replied with his own artillery. Jackson and the State Guard then chased after Sigel’s brigade, engaging them in battle as they pushed them 10 miles southward until they reached the outskirts of Carthage. Jackson had his men divide up and attempted to surround Sigel’s force, the battle went on steadily throughout the day until both forces faced off in the Carthage town square. Both sides then engaged in some skirmishing. At this point, Sigel learned of a large body of Guardsmen—actually all unarmed recruits—moving into the woods on his left outside of town. Fearing this force would turn his flank, he ordered a retreat. The State Guard pursued, but Sigel conducted a successful rearguard action. By evening, Sigel was back in Carthage. Under the cover of darkness, he retreated further to Sarcoxie.

The first chronological major battle after Lincoln invoked “the war power” in lieu of a Declaration of War in his Message to Congress on July 4, 1861,[4] the Battle of Carthage was strategically and tactically significant.

The battle marks the only time a sitting U.S. State governor has led troops in the field, and then, against the Union to which his state belonged.

Serving at the vanguard of Governor Jackson’s army a band of 150 independent partisan rangers under the command of Capt. Jo Shelby, a Missouri farmer. From tactical battlefield maneuvers under fire by Sigel’s batteries to pressing his retreat to Sarcoxie, Shelby’s rangers “snatched the victory at Carthage from Sigel’s grasp” and pro-Southern elements in Missouri celebrated their first victory.[2] The depopulation of mineral-rich Jasper County and the destruction of Carthage by sustained hostilities throughout the war paved the way for Victorian era resettlement and, with it, environmentally destructive lead and zinc mining. 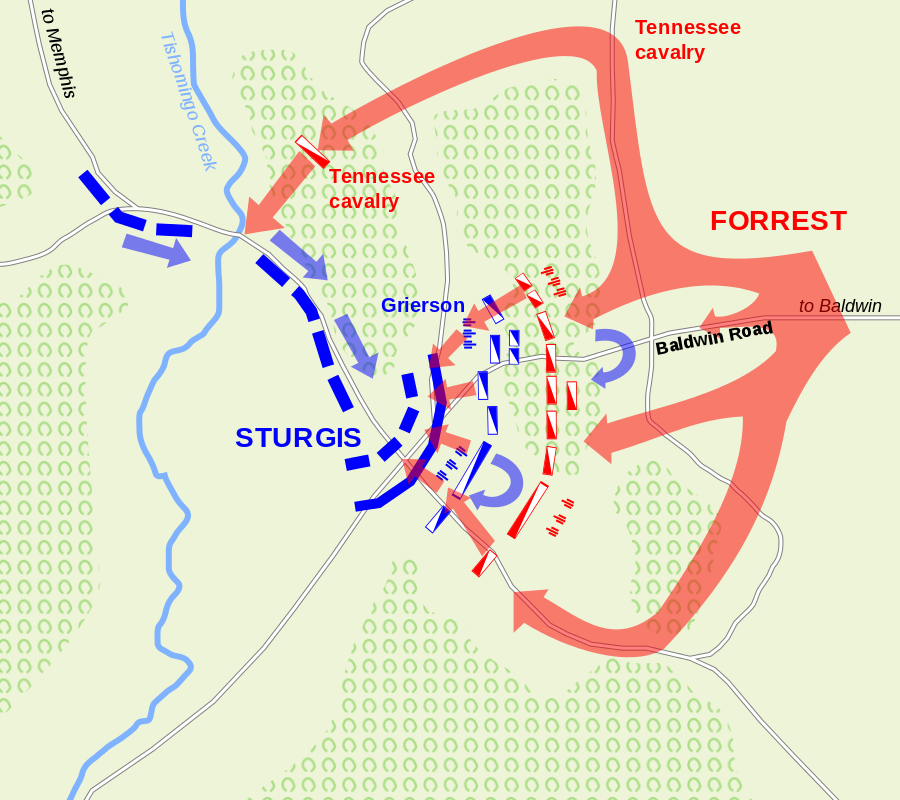 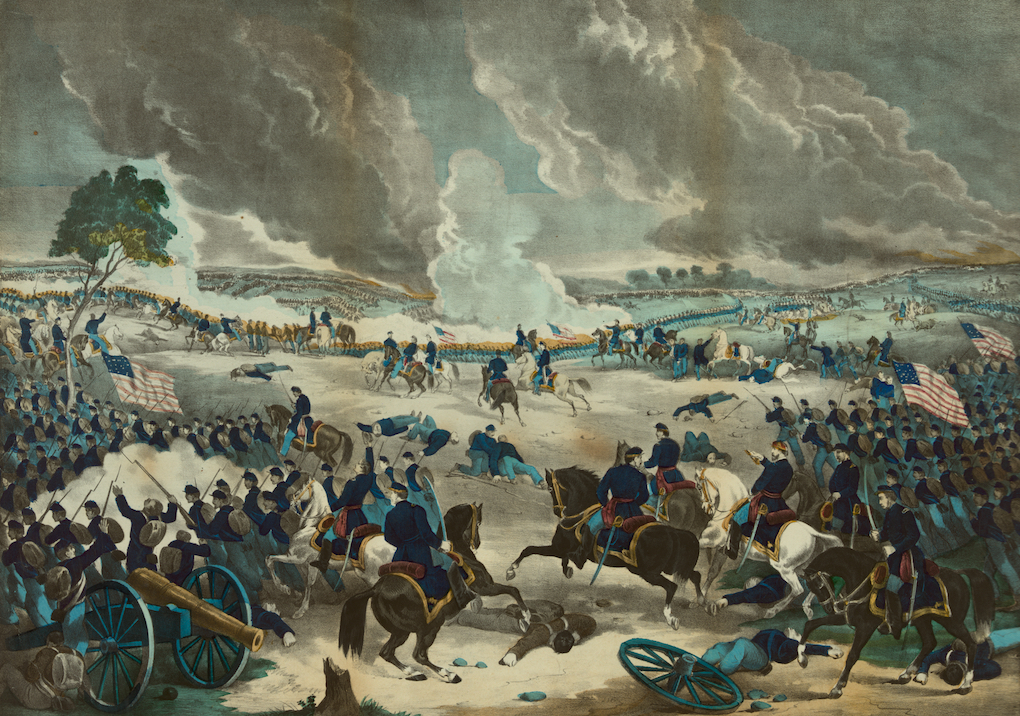 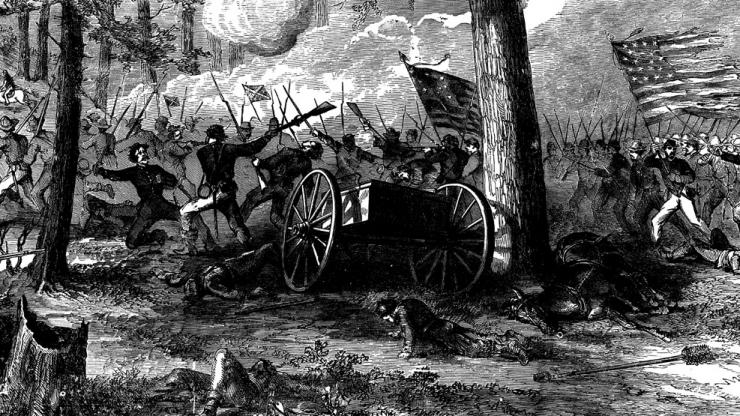