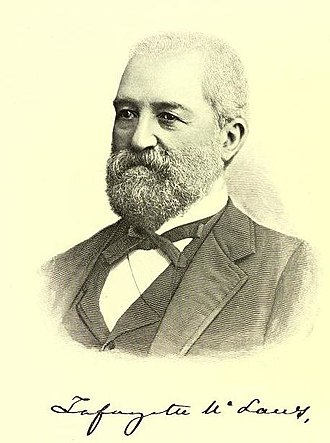 McLaws next saw active service opposing Sherman’s advance into the Carolinas. At the Battle of Rivers’ Bridge on February 2, 1865, his command resisted the advance of the Army of Tennessee into South Carolina. His forces delayed the Federal crossing of the Salkehatchie River until they found other crossings and turned his right flank. McLaws led a division under Lt. Gen. William J. Hardee at the Battle of Averasborough, commanding the Confederate third line of defense, and at the Battle of Bentonville. His division was little engaged at Bentonville because of vague orders. In the aftermath of these battles, McLaws had problems with the discipline of his division, holding multiple roll calls per day to prevent desertion and looting. When Gen. Joseph E. Johnston reorganized the army, McLaws lost his command assignment. He was assigned command of the District of Georgia after Bentonville. He may have surrendered with Johnston’s army in North Carolina on April 26, 1865; however, there is no record of his parole. On October 18, 1865, McLaws was pardoned by the U.S. government.
After the war, McLaws worked in the insurance business, was a tax collector for the IRS, served as Savannah’s postmaster in 1875-76, and was active in Confederate veterans’ organizations. Despite his wartime differences with Longstreet, McLaws initially defended Longstreet in the post-war attempts by Jubal Early and others to smear his reputation. Lafayette McLaws died in Savannah and is buried there in Laurel Grove Cemetery. He is the posthumous author of A Soldier’s General: The Civil War Letters of Major General Lafayette McLaws (2002).
Biography courtesy of Nate Mote