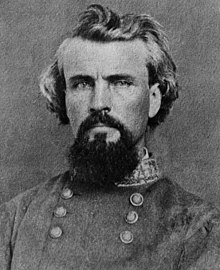 .. Suffers his biggest defeat when Union General Andrew J. Smith routs his force in Tupelo, Mississippi. The battle came just a month after the Battle of Brice’s Crossroads, Mississippi, in which Forrest engineered a brilliant victory over a larger Union force from Memphis that was designed to keep him from threatening General William T. Sherman‘s supply lines in Tennessee.

Forrest and his cavalry were part of a 10,000-man force commanded by General Stephen Lee, but Forrest and Lee shared command responsibilities. Forrest’s strategy at Tupelo was similar to his tactics at the Battle of West Point, Mississippi, five months earlier. In both battles, Forrest used part of his force to entice the Yankees into a trap. The plan worked well at West Point, but in Tupelo Smith did not take the bait. Instead of driving right at Forrest, Smith dug his troops in around Tupelo. Lee and Forrest were uneasy about attacking the Yankees, but they agreed to try to drive Smith out of Mississippi.

The assault began on the morning of July 14. Smith’s Union troops were in an ideal position for fending off an attack. The Confederates had to fight uphill across nearly a mile of open terrain. Lee struck one flank and Forrest struck the other. Poor communication ruined the Rebels’ coordination, and after three hours they had not breached the Union line. Although Lee was the ranking Confederate, he had offered Forrest command of the battle. Forrest declined, but assigning blame for the defeat is difficult. Union losses stood at 674, while Forrest and Lee lost over 1,300 soldiers.

Despite the Union victory, the overly cautious Smith had lost an opportunity to completely destroy Forrest and Lee’s army. He had not counterattacked, and the Confederates maintained a dangerous force in Mississippi.