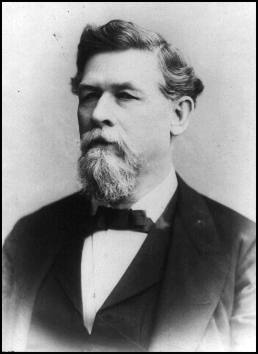 Philip Dale Roddey
(April 2, 1826 – July 20, 1897)
A brigadier general in the army of the Confederate States of America during the American Civil War. Roddey was born in Moulton, Lawrence County, Alabama, to Philip and Sarah Roddey. His father, a saddler, had moved his family to Alabama from eastern Tennessee. Philip D. Roddey’s birth year is usually given as 1826, which is on his tombstone. However, census records show him as several years older, and in fact his father had been shot and killed in an altercation in Moulton in 1824. Roddey’s widowed mother raised her 3 children as best she could, but Roddey received little formal education. He was a tailor in Moulton before he was appointed sheriff of Lawrence County in 1846, serving at least until 1852. He then purchased a steamboat, which he ran on the Tennessee River. He married Margaret A. McGaughey and had a son and a daughter.
When the American Civil War began, Roddey, who had not supported secession, sought to remain out of it. After the fall of Fort Henry, Tennessee, to Ulysses S. Grant in February 1862, however, Union gunboats were able to sail as far as Florence, Alabama, where the shallows at Muscle Shoals stopped them. Rather than allow his steamboat to be seized and used by the enemy, Roddey burned her. He then raised a cavalry company, which he led at the Battle of Shiloh in April 1862.
Roddey was active with his company during the advance on Corinth, Mississippi, General Braxton Bragg writing on May 4, 1862, that “Roddey is invaluable”. On August 21, 1862, Bragg – now in Chattanooga – wrote, “”A portion of our cavalry, consisting of the companies of Captains Earle, Lewis, and Roddey, led by Captain Roddey, has made another brilliant dash upon a superior force of the enemy, resulting in the capture of 123 prisoners.” In October 1862, Roddey accordingly was authorized to increase his command to a regiment, the 4th Alabama Cavalry. Roddey was now a colonel. Roddey’s regiment would serve under both Nathan Bedford Forrest and Joseph Wheeler, principally in Tennessee and Alabama.
In December 1862, the 5th Alabama Cavalry Regiment was brigaded with Roddey’s 4th Alabama Regiment, and Roddey was named the commander of the District of Northern Alabama. Later, the 10th Alabama Cavalry Regiment added to his command, as was a Georgia horse artillery battery. In April 1864, Roddey’s brigade was transferred to the Department of Alabama, Mississippi, and East Louisiana.
Promoted to brigadier general, Roddey led his cavalry brigade thereafter mainly in support of Forrest. Roddey’s men were armed with rifle-muskets rather than carbines, and as such are often regarded to as mounted infantry rather than true cavalry; they generally fought dismounted. Much of the time they were stationed in their own home area, and Roddey is thus called the “Defender of North Alabama”. Roddey fought a delaying action against Grenville Dodge during Abel D. Streight’s 1863 raid across Alabama and Georgia, and remained in Alabama during John Bell Hood’s 1864 Nashville campaign. After Hood’s failure, Roddey joined Forrest in trying desperately to stop Union General James H. Wilson’s cavalry raid into south Alabama in March 1865. Roddey’s command fought for the last time in April at the Battle of Selma, where Forrest’s men were overpowered by the more numerous and better armed Union horse soldiers. Most of Roddey command was captured at Selma. The remainder surrendered at Pond Springs (now Wheeler), Alabama, in May 1865.
After the war, Roddey moved with his family to Tuscaloosa, Alabama. He later relocated in New York City, where he became a successful commission merchant. He moved to London, England, for business reasons in the early 1890s, dying there in 1897.