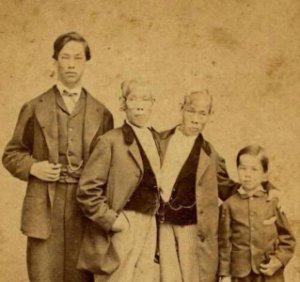 Probably the most famous Asian Confederate soldiers were the two sons of famed P.T. Barnum Circus world-renowned Siamese Twins, Chang and Eng Bunker. (The Thai twins took the name “Bunker” to Americanize themselves.) Chang & Eng, were born joined at the chest from birth and were devoted Confederates. The twins were tobacco growers and living as farmers in North Carolina after they retired from the circus. Interestingly in 1865, Sherman tried to conscript a most unwilling Eng for the Union Army, but could not, since Chang had not been conscripted as well. If Sherman had known more about their family, he wouldn’t have bothered to even try to draft a Bunker, so fierce was the family’s devotion to the Confederacy.

During the war, the Bunkers strongly supported the Confederate South, providing food, clothing, and nursing to Confederate troops. Chang’s son, Christopher, served in Co. I, 37th Battalion, Virginia Cavalry. He was wounded and captured at Moorefield, WV, and spent several months in a Yankee POW Camp before being exchanged. He had to eat rats to keep from starving in the Yank POW Camp. Stephen Bunker, son of Eng Bunker, joined the same cavalry unit.

wounded at Winchester, VA, and again before the war was over He and his brother both were farmers after the war.
The Confederate South was supported then, and now, by all persons who valued/value self-governance; red, yellow, black, brown and white, and everything in between.