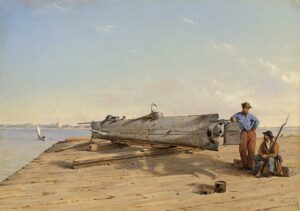 On the evening of 17 February 1864, the Hunley made her first mission against an enemy vessel during the American Civil War. Armed with a spar torpedo, mounted to a rod extending out from her bow, the Hunley’s mission was to lift the blockade of Charleston, South Carolina by destroying the sloop-of-war USS Housatonic in Charleston Harbor.
The Union Warship — USS Housatonic 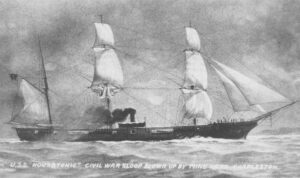 Housatonic was a 1,240 long tons (1,260 t) vessel with an armament of twelve large cannons, stationed at the entrance of Charleston Harbor roughly five miles off the coast. Housatonic was commanded by Captain Charles W. Pickering and had a crew of 150 men. The Hunley began her approach at about 8:45 pm, commanded by First Lieutenant George E. Dixon and crewed by seven volunteers.
Accounts differ about the initial approach; what is known is that the Hunley was spotted just before embedding her torpedo into Housatonic’s hull. Official accounts say Housatonic was unable to fire a broadside at Hunley and hit her with only small arms fire. The Hunley attached her explosive to Housatonic’s side before reversing and setting a course for home. 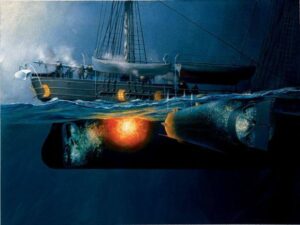 A few moments later the torpedo detonated and sank the sloop-of-war. First-hand reports say no explosion was heard by the crew of Housatonic, who immediately began climbing the rigging or entering lifeboats as the sloop began to sink. Within five minutes, Housatonic was partially underwater. Hunley thus achieved the first sinking of a warship in combat via submarine.
The Mystery of the Hunley’s Sinking and the Myth of the Blue Light
The Hunley also sparked one of the greatest mysteries of the Civil War when she failed to return to port, spending the next 136 years buried near the remains of her quarry in the sandy seafloor off Charleston, South Carolina.
Recovered in 2000, the Hunley resides in a laboratory in North Charleston, where researchers are revealing the details of her construction, contents, and crew. The circumstances of her sinking remain the greatest unsolved mystery, and her iconic “blue light” has played a central role in modern discussions of her fate. 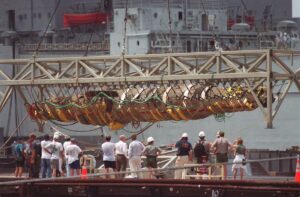 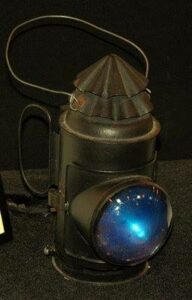 A “blue light” signal purportedly from the Hunley’s crew has been cited by modern historians as proof that she survived the explosion of her own torpedo, only to suffer some other calamity as she left the sunken Housatonic on her return to shore.
Official Confederate correspondence from her shore base states that prearranged signals from the sub were observed and that an answering signal was displayed to guide her home. A postwar published account stated that these signals were two blue lights.
Read More about the myth of the H.L. Hunley’s blue lantern.
https://www.civilwarmonitor.com/…/the-myth-of-the-h-l…
When researchers opened the vessel, they found the Hunley’s crew still at their posts. All of the Confederate sailors were identified. They were buried with full military honors on April 17, 2004 in Charleston’s Magnolia Cemetery.
Read more about the Hunley’s crew and see the reconstructed images of their faces.
https://www.hunley.org/hunley-crew-burial/ 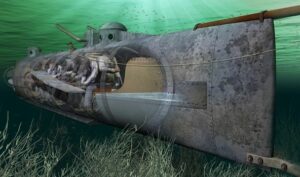