Taxes caused the Civil War: Although I’m no scholar of American history, there are a few Seminole events that I’ve always felt confident in having a basic understanding of. One of those is the cause of the Civil War, which was slavery, of course. But then, I did some research, and I had to rethink everything.

“If the shoe fits, wear it,
If New York’s in debt, why should Virginia bear it?
Uh… Our debts are paid, I’m afraid,
Don’t tax the South cuz we got it made in the shade.
In Virginia, we plant seeds in the ground,
We create, you just wanna move our money around!” – Hamilton (Musical), Cabinet Battle #1

The cause of the Civil War dates back to long before the first shots were fired by the South at Fort Sumter, South Carolina in 1861. In fact, economic disputes between the North and South existed even before the Revolutionary War (also fought over taxes!), and things got even worse with the Tariff of 1828.

Called the “Black Tariff” or “Tariff of Abomination,” (meaning, “the evilest thing ever,”) the tariff was created to repay the national debt (who does that?!) after the War of 1812. However, by 1832 the national debt was paid and there was no reason for such high taxes. The tariff had created a favorable situation for the North, who benefited greatly from such high taxes.

The South produced and exported most of the goods in America, and under the tariff, that resulted in the South paying about 75% of all taxes in America.

The tariff also prevented them from buying European imports because after taxes were collected they were too costly. This meant that the South’s only option was to buy from the North.

It seemed that either way the South’s money was ending up in the North, and Southerners resented the arrangement. President Andrew Jackson was able to reduce some of the taxes on the South in the Great Compromise of 1833, but the same year the Force Bill was passed that allowed the government to collect federal tariffs from states by any means necessary, including by force. The seeds of the Civil War had been sown.

Lincoln Did Not Campaign Against Slavery 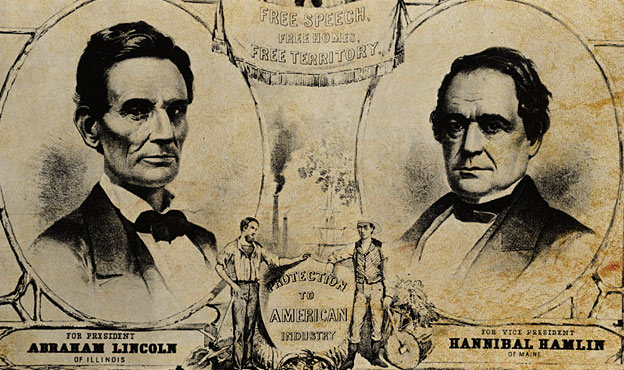 Abraham Lincoln enjoyed the support of the rich Northern industrialists during his run for the presidency in 1860. These industrialists were much more concerned with profiting from higher taxes in the South than the moral dilemma of slavery.

Lincoln was morally opposed to slavery, stating years earlier that slavery was, “an unqualified evil to the negro, the white man, and the State,” but that view was not going to win him the presidency. During his campaign, Lincoln repeatedly stated that he had no intention to challenge slavery, but did champion a return to high import taxes which benefitted his constituency in the North.

“I declare that I have no purpose, directly or indirectly to interfere with the institution of slavery in states where it exists. I believe I have no lawful right to do so, and I have no inclination to do so.” – Abraham Lincoln 1860

After Lincoln was elected, he made further efforts to placate the South and maintain the Union and the institution of slavery by giving his blessing to the Corwin Amendment to the Constitution. It went even further than the infamous Dred Scott decision of 1857 which concluded that no black person (slave or non-slave) could claim U.S. citizenship. The Corwin Amendment stated,

“No amendment shall be made to the Constitution which will authorize or give to Congress power to abolish or interfere, within any State, with the domestic institutions thereof, including that of persons held to labor or service by the laws of said State.” – Corwin Amendment

The Corwin Amendment not only protected the institution of slavery but included language to make itself unamendable so that no future amendment to the Constitution could undo it. Essentially this first version of the 13th Amendment secured slavery as a permanent institution in America.

The Corwin Amendment won the required two-thirds support in both the Senate and House and was then ratified by a number of states including Ohio, Maryland, and Illinois later that year. However, the outbreak of the Civil War, fortunately, interrupted its complete ratification as the final version of the 13th Amendment to the Constitution.

Yes, that’s right. The original, and now forgotten 13th Amendment was one that protected slavery instead of abolishing it, as the later version of the amendment did in 1865. You won’t read that in most American history books, or hear about it in the movie, Lincoln.

How Taxes Ignited the Civil War

“The Northern onslaught upon slavery was no more than a piece of specious humbug designed to conceal its desire for economic control of the Southern states.” – Charles Dickens

As you can see, in early 1861 the institution of slavery was secure in America, and Abolitionists were still largely a far-left group of “crazy liberals,” so why go to war? Well, taxes of course. Just before Lincoln took office departing president Buchanan signed a tariff even worse than the Tariff of Abomination of 1832.

The new tax in 1861 was called, the Morrill Tariff, and was the highest tariff in American history, taxing imports at over 45%, with iron products taxed at 50%! Victorious Republicans cheered the heavy taxes that benefitted the Northern industrialists who backed Lincoln.

In Lincoln’s inaugural address he made no mention of ending slavery but did promise to collect high taxes on imports in the South under all circumstances and without exception.

In response, the furious Southern states drafted a constitution of their own which included a ban on high import taxation. The South’s strategy was to offer low import taxes so that North American trade would migrate to the tax-friendly ports of the South that included Charleston, Savannah, and New Orleans.

The fuse had been lit on the American Civil War. While the North was willing to live with slavery in the South, there would be no such concession on taxes. The forts in Southern ports would be used to enforce tariffs and collect taxes, even if the South seceded.

On April 12, 1961, frustrated Southerners fired on Ft. Sumter which was located at the entrance to Charleston Harbor and filled with federal troops enforcing the collection of taxes by U.S. customs officers. These were the first shots of the American Civil War and were fired in anger over unfair taxation.

The Civil War Begins (Still Not About Slavery!)

In response to the heated tax dispute, tensions between the North and South soon escalated to military conflict. However, slavery still wasn’t the main issue, and it would be two full years until Lincoln rallied Northerners with a more inspiring cause (people weren’t willing to die over taxes and preserving the Union?) starting with the Emancipation Proclamation. In 1863, President Lincoln said:

“Things had gone from bad to worse until I felt we had reached the end of our rope on the plan we were pursuing; that we had played our last card, and must change our tactics or lose the game. I now determined upon the adoption of the emancipation policy.”

The real reason for the Civil War, based on economics and taxes was quickly losing its luster, and a new cause was needed to rally the Northern troops.

It was at this point that Lincoln decided that human rights were a better cause than economics, so slavery was promoted as the new cause to fight for. (Has American politics always been about distracting people from the real issues?)

So, you might call the Emancipation Proclamation the beginning of “plan B” in the North’s strategy for waging the Civil War. By freeing the slaves, President Lincoln gambled that Northerners would be more inspired to fight and that newly emboldened slaves would turn against their masters and help destabilize the South.

The cause of slavery also gave the North moral high-ground in a war in which both sides were actually fighting for selfish economic reasons. The gamble paid off, and the tide turned in the war as 180,000 former slaves joined the fight on the Union lines.

Over 620,000 soldiers died in the Civil War, including 38,000 former slaves. After the war (a new version of) the 13th Amendment was drawn up that ended slavery. Or did it?

The 13th Amendment itself included a glaring loophole in its language:

“Neither slavery nor involuntary servitude, except as a punishment for crime whereof the party shall have been duly convicted, shall exist within the United States…” – 13th Amendment

Doh! Well, you don’t have to be a lawyer to realize that according to the 13th Amendment you could keep blacks enslaved simply by convicting them of a crime. Really all the South had to do was charge their slaves with a crime, convict them, and then they could be punished with “involuntary servitude.

That’s exactly what happened, and the most common crime that blacks were charged with was, “vagrancy,” or simply being unemployed. Slavery was rebranded as “convict-leasing,” and remained prevalent throughout the South for decades.

This practice became so common that in 1898 (over 30 years after the supposed end of slavery) over 70% of revenue in the State of Alabama came from the labor of these men labeled as “convicts.”

While the North may have won an economic victory in the Civil War (affirming their right to heavily tax the South) their win didn’t improve the lives of most slaves, especially during the subsequent Reconstruction and Jim Crow periods.

In fact, it would be another 99 years after the end of the Civil War until the Civil Rights Act of 1964 was signed which finally outlawed discrimination based on race, color, religion, or gender. So, if the North won the Civil War, how should we define “victory?”

Conclusion: The Civil War Was Not About Slavery (nor Civil!)

Hmmm… after my research, I think that “death and taxes” would have been a more appropriate name for the Civil War. But then again, that would have been a tough sell for politicians. It’s amazing what effective marketing can make us believe! (like, Lucky Strike’s smoking is healthy campaign)

Clearly Lincoln was in an incredibly difficult situation after being elected to lead a country that was being torn apart, and many argue that he was our nation’s greatest president. However, neither history nor news should not be clouded by “alternative facts” that benefit certain interests.

“History is written by the victors.” – Winston Churchill

The myth that slavery was the cause of the Civil War pervades to this day, while historical evidence shows us that the actual cause of the war was clearly taxes.

History also tells us to be skeptical of any imperial power that wages war for a “moral” or humanitarian cause. (Um, Iraqi Freedom?!) There’s likely an alternate reason for these conflicts, usually involving taxes!