Skip to content
Facebook Twitter Reddit
Chalmers was re-elected in 1880 but the election was contested by his Republican African-American opponent, John R. Lynch. Congress awarded the seat to Lynch because of marked election fraud by the Democrats. In 1882 Chalmers ran as an Independent Democrat on a fusionist ticket, with support by Republicans and Greenbackers. He contested the victory of the regular Democrat, and Congress finally awarded the seat to Chalmers, seating him in 1884. He left politics after losing the election in the fall of 1884.
Chalmers had served in the Confederate States Army during the American Civil War. Initially commissioned as a captain of infantry, he reached the rank of brigadier general and was a noted cavalry commander involved in numerous actions.

James Ronald Chalmers was born in Halifax County, Virginia, on January 11, 1831. His father was Joseph Chalmers, who, having moved to Mississippi with his family when James was a boy, settled in Holly Springs in 1839. He was first appointed by the governor to fill a term, then elected by the state legislature as U. S. Senator. James was prepared for South Carolina College at Columbia, where he was graduated in 1851.
He returned to Holly Springs to study (read) law with an established firm and was admitted to the bar in 1853. After a few years of practice, Chalmers was elected as district attorney in 1858. In 1861 he was elected as a delegate to the convention which passed the ordinance of secession. Like his father an ardent State rights Democrat, Chalmers voted in favor of secession. 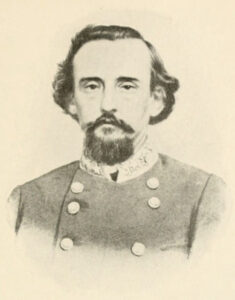 Chalmers entered the Confederate States Army as a captain and was soon promoted to Colonel of the 9th Mississippi Infantry Regiment in 1861. For a while, he commanded at Pensacola, Florida. On February 13, 1862, he was promoted to brigadier-general, and on April 6 was assigned to the command of Second Brigade, Withers’ Division, Army of the Mississippi. He and his command did splendid fighting in the Battle of Shiloh. When Bragg was conducting operations in north Mississippi he sent Chalmers with a force of cavalry to make a feint upon Rienzi, Mississippi in order to cover the movement of a body of infantry to Ripley, Mississippi. In executing this order Chalmers encountered Sheridan, July 1, and a stubborn engagement took place. It lasted from about half-past eight in the morning till late in the afternoon. Chalmers, ascertaining that Sheridan had been reinforced by infantry and artillery, retired.
When Bragg advanced into Kentucky in the summer of 1862 Chalmers’ command was a part of his force, performing its duties with courage and zeal. In the Battle of Murfreesboro, he and his men again rendered brilliant service. In April 1863, General Chalmers was placed in command of the Fifth Military District in the Department of Mississippi and East Louisiana. In 1864 he was assigned to the command of cavalry brigades of Jeffrey Forrest and McCulloch, forming the first division of Forrest’s Cavalry Corps. This cavalry division was subsequently enlarged by the addition of Rucker’s Brigade.
General Chalmers bore a conspicuous part in the Battle of Fort Pillow and in all the campaigns of Forrest in north Mississippi, west Tennessee, and Kentucky. He also led forces in John Bell Hood‘s Tennessee Campaign. On February 18, 1865, Chalmers was put in command of all the Mississippi cavalry in the Confederate service in Mississippi and West Tennessee.

In the waning days of the Reconstruction era, Chalmers was elected to the State Senate in 1875 and 1876. Democrats regained control of the House of Representatives in 1875 on the national level, for the first time since the Civil War.
The campaign seasons in Mississippi were accompanied by increasing violence. Chapters of Red Shirts, a paramilitary group working for the Democratic Party that sought to disrupt and suppress Republican voting, helped Democrats win seats in Mississippi and the Carolinas.

In 1876 Chalmers was elected as Representative from Mississippi’s 6th congressional district to the Congress of the United States, serving in the Forty-fifth and Forty-sixth Congresses, from March 4, 1877 – March 3, 1881. His Republican opponent John R. Lynch contested the victory, as he was previously strongly elected from this black-majority district. With Congress dominated by Democrats, the Election Committee refused to hear the case.

Chalmers won re-election and received the certificate of election to the Forty-seventh Congress in 1880, serving from March 4, 1881 – April 29, 1882. That time his seat was successfully contested by Republican candidate Lynch.

When his case came before the Committee on Elections on April 27, 1882, Lynch argued that in five counties, more than 5,000 of his votes had been counted for Chalmers. He further asserted that several thousand Republican ballots had been thrown out after a secret hearing because of technicalities such as a clerical failure to send a list of names with the returns and the presence of unusual marks on the ballots. Lynch’s strongest arguments were based on Chalmers’s remarks that Lynch’s votes had been thrown out and that he (Chalmers) was “in favor of using every means short of violence to preserve [for] intelligent white people of Mississippi supreme control of political affairs.” The committee ruled in Lynch’s favor, and on April 29, 1882, the House voted 125 to 83 to seat him; 62 Members abstained.

Lynch served the remainder of the term.
In the fall of 1882, Chalmers ran as an Independent Democrat as part of a fusion ticket supported by Republicans and the Greenback Party, to the Forty-eighth Congress. Democrat Van H. Manning claimed victory, and Chalmers contested the legality of the election. Chalmers finally was verified by Congress as the winner and allowed to take his seat on June 25, 1884. He was unsuccessful in running for re-election in 1884.
Chalmers wrote to Republican President Chester A. Arthur in December 1882 about how to defeat the regular Democrats in Mississippi. Independents like him sometimes affiliated with Greenbackers, other men who had left the regular party, and even Republicans in a fusionist ticket. In this period, Senator William Mahone of Virginia had gathered various factions into what was called the Readjuster Party, which was prominent in Virginia politics. Chalmers proposed the same for Mississippi. Neither he nor Mahone was successful in breaking up Mississippi Democrats or the Solid South.
After failing to win the election in 1884, Chalmers left politics, returning to the full-time practice of law. He moved his practice to Memphis, Tennessee, where he died in April 1898.
Findagrave