Among the 5,000 grave markers for Confederate soldiers in the Soldier’s Rest section of Cedar Hill Cemetery in Vicksburg, Mississippi, one pays tribute to Old Douglas, the camel of the 43rd Mississippi Infantry, Company A, nicknamed “The Camel Regiment.”

The Confederate States of America was established in February 1861. It is not known how Douglas, a dromedary (one hump) camel, came to serve with the 43rd Mississippi Infantry during the Civil War. He was a gift to Colonel W. H. Moore, who assigned him to carry the instruments and knapsacks for the regimental band. Douglas participated in the Battles of Iuka and Corinth under Major Generals Sterling Price and Earl Van Dorn, respectively, before being shot by a Union sharpshooter on June 27th, 1863, during the siege of Vicksburg. 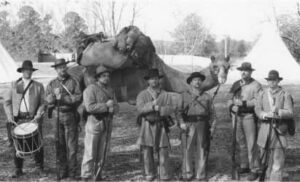 Douglas was well-loved by the humans of his regiment, less so by the horses. On one occasion, Douglas is said to have spooked at least one of the horses into stampeding through a camp near Iuka, injuring horses and soldiers, possibly killing some of the former. Soldiers climbed trees to get out of the path of destruction.

Douglas routinely broke free of his tether, but usually used his freedom to graze, never wandering too far from the regiment. On that fateful day in 1863, though, he wandered into no man’s land between the Union and Confederate armies and paid the ultimate price.

The Union army responded to the camel’s death, according to legend, by eating him, since food was scarce, and making war souvenirs out of his bones. The Confederates responded by making a point of severely wounding the sharpshooter who had killed their beloved camel. His gravestone, however, states that he was eaten by his own Confederate regiment who were suffering under the Siege of Vicksburg.

Douglas was not the only camel in the United States during the Civil War. Before he became president of the Confederacy, Jefferson Davis was the U.S. Secretary of War. In the 1850s, he implemented the Texas Camel Experiment in the 1850s to see how useful camels would be in the American Southwest where horses were beginning to have trouble on long trips. Camels can carry immensely heavy loads for long distances with little water. They are also not nearly as tamable as horses, though Douglas was called “faithful” and “patient” by those who knew him best.

Camels were brought over from the Mediterranean and North Africa and used for exploring the Southwest. The Civil War took the steam out of the experiment, and the camels eventually dispensed. Many were sold at auctions in 1864 and 1866 to work in circuses and mines, as postal carriers, and pack animals and racing camels. Some even escaped or were set free, and feral camels were occasionally spotted roaming the American Southwest for years after. 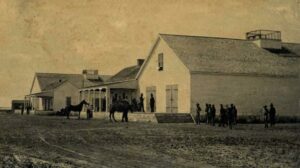 Lest the contributions of camels in the Civil War be forgotten, the Texas Camel Corps promotes their stories with reenactments and hosts camel rides. Two of the camels are descendants of Old Douglas.