Skip to content
Facebook Twitter Reddit
American soldier, lawyer, and politician from Paris, Texas, United States. He was a Major General for the Confederacy in the Civil War and later represented Texas in the U.S. Senate.
Early life 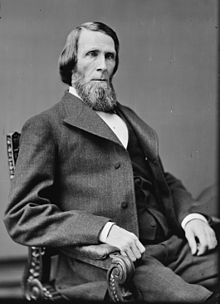 Samuel was born in Tompkinsville, Kentucky, to Rice and Lucy (Bell) Maxey. His father was a lawyer, and in 1834 he moved the family to Albany, Kentucky to take a position as the County Clerk for Clinton County. In 1842 young Maxey got an appointment to the U.S. Military Academy at West Point.
Although he consistently ranked near the bottom of his class, Maxey did graduate in 1846 and was commissioned a 2nd Lieutenant. He was assigned to the Seventh Infantry Regiment which was engaged in the Mexican-American War and joined them in Monterrey, Mexico. Maxey was cited for his actions in the battles of Cerro Gordo and Contreras in the summer of 1847. He also participated in the battlers of Churubusco and Molino del Rey. He was promoted and placed in command of a police company in Mexico City.
In June 1848, Maxey was transferred to Jefferson Barracks in Missouri, and the following year he resigned from the army. He returned to Albany, read law with his father Rice Maxey and they began a joint practice when Samuel was admitted to the Bar in 1851. He married Marilda Cass Denton on June 19, 1853. Then in October 1857 father and son moved their families to a small farm they purchased just south of Paris, Texas. They resumed a joint law practice here as well.
Civil War
Samuel was elected the district attorney for Lamar County in 1858 and was a delegate to the state’s Secession Convention in 1861. That same year he was elected to the state Senate, but never served, preferring military duty. His father, Rice Maxey, was elected to replace him. Samuel had been given authority by the Confederate government in September to raise a regiment as its Colonel.
In December, Colonel Maxey led his 1,120 man Ninth Texas Regiment from Bonham to join General Johnston at Memphis, Tennessee. However, he was soon separated from his regiment and set to building bridges near Chattanooga. In March 1862, Maxey was promoted to Brigadier General. The regiment was badly mauled at the Battle of Shiloh, but he was not present. In fact, he saw very little action during this period. He did see action at the Siege of Port Hudson in 1863.
In December 1863, General Maxey was assigned as commander of the Indian Territory. His early success in conducting raids and capturing supplies prevented a Union Army invasion of Texas and earned him a promotion to Major General. In 1865 he was ordered to Houston, Texas, to take command of a Division. He turned over command of the Indian Territory to the Indian General Stand Watie on February 21, 1865, and proceeded to Houston.
Maxey’s new command was plagued by desertions and his inability to get supplies and equipment. Frustrated and discouraged, he was allowed to resign on May 22, 1865. He returned home to Paris, and formally surrendered in July to General E.R.S. Canby. Although nominally a prisoner of war, he remained at home on parole.
Later Political Career
As a senior officer of the Confederacy, Maxey was not eligible to hold political office or even practice law. In October 1865 he began his appeal for a presidential pardon. He was finally successful when President Johnson pardoned him on July 20, 1867, after a personal appeal from Maxey’s former West Point classmate Ulysses S. Grant. He resumed the practice of law in Paris.
In 1872 he ran for the U.S. Congress but lost in the Democratic Party Primary to William P. McLean. In 1873, Governor Davis offered Maxey an appointment to the Texas District Court, but he declined due to prior involvement as a lawyer with cases before the court.
In January 1875, the Texas Legislature elected him to the United States Senate where he served two terms, from March 4, 1875, until March 4, 1887. He was an effective senator, improving postal and rail service in Texas and arguing against increased tariffs. But, he took little interest in larger national or party affairs. So the legislature named the more dynamic John H. Reagan to replace him.
Maxey returned to the practice of law in Paris, this time with his wife’s nephew Benjamin Denton and Henry William Lightfoot. The latter of the two later married Maxey’s adopted daughter Dora Maxey. When his nephew, Sam Bell Maxey Long, joined the firm in 1892 he finally retired. He died in 1895 at Eureka Springs, Arkansas, where he had gone for treatment of an intestinal problem. Samuel and Marilda are buried in the Evergreen Cemetery in Paris. The townhouse that he built there in 1867 is now a state historical site on South Church Street and is open to visitors.