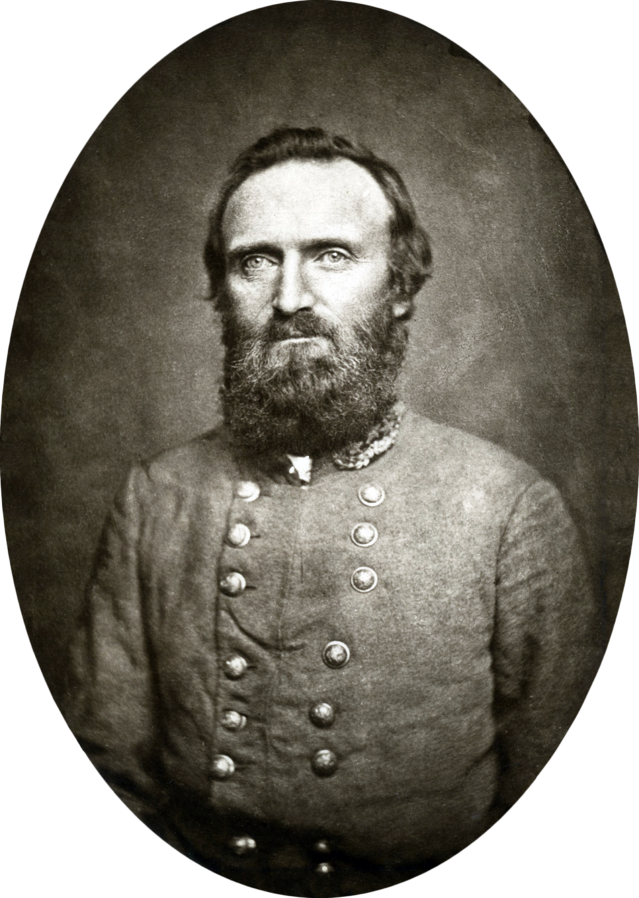 Mention the legendary Confederate General Stonewall Jackson to most people and the image that immediately comes to mind is one of a fearless, hard-fighting Southerner known for his eccentricities, who some say fought for slavery. But Thomas Jonathan Jackson was a much more complicated man.

Indeed, a careful study of his life would lead one to believe that General Jackson might even be described as a civil-rights leader. Yes, that’s right, a civil-rights leader. In the nineteenth century, prior to the War of Federal Aggression, Virginia law prohibited whites from teaching blacks to read and write. Though Stonewall Jackson was known as an upstanding and law-abiding citizen in Lexington, he routinely broke this law every Sunday.

Though the law was not strictly enforced, Jackson quietly practiced civil disobedience by having an organized Sunday school class every Sunday afternoon, teaching black children to read, and teaching them the way of salvation. There are still churches active today that were founded by blacks reached with the Gospel through Jackson’s efforts. Jackson taught the Sunday school class for blacks while he served as a deacon in Lexington’s Presbyterian Church. It was in the autumn of 1855 that Jackson, with the permission of his pastor, Dr. William S. White, began the class in a building near the main sanctuary. Every Sabbath afternoon shortly before 3:00 pm, the church bell would toll letting everyone know it was time to worship the Creator of all men. Jackson quickly gained the admiration and respect of blacks in the surrounding area as his zeal was apparent, and he took this solemn responsibility seriously. Attendance often numbered more than one hundred and Dr.White later wrote that Jackson “threw himself into this work with all of his characteristic energy and wisdom.”

Jackson not only demanded much of himself in reaching slaves and free blacks, he demanded much of his students. His classes began promptly at three, and once he started, the classroom door was locked and latecomers were not allowed entrance. Bibles and books were awarded to those who were faithful and showed satisfactory progress. He also expected his students to give to the Lord’s work.

“On one occasion Gen. Thomas J. Jackson was appointed one of the collectors of the Bible Society. When he returned his list it was discovered that, at the end, copied by the clerk of session, was a considerable number of names written in pencil, to each of which a very small amount was attached. Moreover, the session, recognizing very few of the names, asked who these were. Jackson’s characteristic reply was ‘They are the militia; as the Bible Society is not a Presbyterian but a Christian cause, I deemed it best to go beyond the limits of our own church.’ They were the names chiefly of free Negroes.”

This relationship between Jackson and the blacks of his community was not all that uncommon in the South, particularly pertaining to whites who were devout Christians.

“In Jackson’s mind, slaves were children of God placed in subordinate situations for reasons only the Creator could explain. Helping them was a missionary effort for Jackson. Their souls had to be saved. Although Jackson could not alter the social status of slaves, he could and did display Christian decency to those whose lot it was to be in bondage…he was emphatically the black man’s friend.” – Dr. James I. Robertson

It was obvious that Jackson’s concern for his black brethren was real and something that occupied his mind even at the height of the war.

“Soon after one of the great battles, a large crowd gathered one day at the post office in Lexington, anxiously awaiting the opening of the mail, that they might get the particulars concerning the great battle which they had heard had been fought. The venerable pastor of the Presbyterian Church (Rev. Dr. W.S. White, from whom I received the incident) was of the company and soon had handed him a letter which he recognized as directed in Jackson’s well-known handwriting. ‘Now,’ said he, ‘we will have the news! Here is a letter from General Jackson himself.’ The crowd eagerly gathered around but heard to their very great disappointment a letter which made not the most remote allusion to the battle or the war, but which enclosed a check for fifty dollars with which to buy books for his colored Sunday school, and was filled with inquiries after the interests of the school and the church. He had no time for an inclination to write of the great victory and the imperishable laurels he was winning, but he found time to remember his noble work among God’s poor and to contribute further to the good of the Negro children whose true friend and benefactor he had always been. And he was accustomed to saying that one of the very greatest privations to him which the war brought, was that he was taken away from his loved work in the colored Sunday school.” ~ William Jones

It was further obvious that the blacks of Lexington knew that Jackson’s love and concern for their spiritual well-being were real and they returned his affection.

“Jackson thus acquired a wonderful influence over the colored people of that whole region, and to this day his memory is warmly cherished by them. When Hunter’s army was marching into Lexington, the Confederate flag which floated over Jackson’s grave was hauled down and concealed by some of the citizens. A lady who stole into the cemetery one morning while the Federal army was occupying the town, bearing fresh flowers with which to decorate the hero’s grave, was surprised to find a miniature Confederate flag planted on the grave with a verse of a familiar hymn pinned to it. Upon inquiry, she found that a colored boy, who had belonged to Jackson’s Sunday school, had procured the flag, gotten someone to copy a stanza of a favorite hymn which Jackson had taught him, and had gone in the night to plant the flag on the grave of his loved teacher.” ~ William Jones

General Stonewall Jackson was, without question, one of the greatest generals America ever produced. He was fearless in battle and his legendary “Valley Campaign” fought in the Shenandoah Valley of Virginia is still studied to this day. But more than that, he was a devout Christian and a lover of all good men – regardless of their color. Southerners and lovers of truth should do everything possible to educate future generations about the truth of our history, especially when it comes to the heroes of our faith and of our beloved Southland. Only in truth can we worship the Creator of all men.