Holt Collier came into the world a slave in 1846 in Jefferson County, Mississippi, born on a plantation owned by a man named Howell Hinds. Hinds had a particular fondness for Collier, and sent him to school in Bardstown, KY with his own sons to see that he got an education. Collier didn’t take to formal education and played hookey most days. He preferred to be outside chasing squirrels, quail, or even bear. Yes, in those days the canebrakes of the Mississippi Delta region were thick with black bears. By the age of 10, he was known as the best marksman with a rifle in all the swampland of Mississippi and had already killed his first bear. At 14, he had earned a reputation as one of the best and bravest bear hunters in the Delta.

At the outbreak of the Civil War, Howell Hinds joined the Confederate Army and gave Collier his freedom papers. Collier immediately tried to join the Confederate forces alongside Hinds, but was told he was too young to fight. He ran away from the plantation and stowed away on a riverboat in the Mississippi for almost a year and then joined the 9th Texas Brigade by his own choice and served throughout the war. He finished his service as one of Nathan Bedford Forrest’s most trusted cavalry scouts, known as a superb horseman and marksman.

During the time of Reconstruction, Collier was accused of murdering a Yankee soldier, Captain James King, but was acquitted by a military tribunal in Vicksburg. King and Howell Hinds were involved in a fight and during the dispute, Hinds, though a much older man, knocked the youngster down several times. King’s anger grew with every knockdown. Finally, the thoroughly infuriated young man drew a knife on his unarmed opponent, but a bystander fired shots killing King, preventing him from drawing blood with his knife. It was never fully proven that Holt Collier was the man behind the gun. Soon after the trial, Collier left Mississippi and headed for Texas to lay low and let the controversy of the trial and King’s death blow over.

While in Texas, Collier used his skills as a horseman to work as a cowboy for one of the Lone Star State’s Founding Fathers, Lawrence Sullivan Ross, on Ross’ large ranch. Ross was one of the first Texas Rangers and eventually Governor of Texas, which adds a bit of irony to the story considering Collier was biding time waiting for a murder accusation to pass.

After returning to Mississippi, Collier got by as a hunter and guide. He was known to have killed more bears than anyone in U.S. history–over 3000 by his own count, more than the number taken by Daniel Boone and Davy Crockett combined. He began providing wild game for meat to loggers, railroaders, and levee construction crews. Collier supported himself with his rifle and skills in the field. He was guide of choice in those days, leading hunts for a Who’s Who of prominent men from around the country. Once, when an angry black bear cornered one of his prized dogs inside a hollowed log, Collier climbed in. As the bear tried to crawl past Collier and escape from the log, Collier stabbed it with his knife, killing the bear. Collier suffered only minor scratches.

In 1902, he received word that a prospective hunter was looking to hunt the canebrakes for bear and requested his services. As Collier told it in his own words:

One day Major Helm came to me and said: ‘If you can get things ready in a month and not let anybody know what you’re doing, President Roosevelt will go hunting with us”. I got things ready; found a beautiful campin’ place. I was boss of the hunt. Along came the President with a car-load of guards, but he left all but one of ’em in the car. Anyway he was safer with me than with all the policemen in Washington. The President was a pleasant man; when he was talking he’d stop every little while to ask other people’s opinion. Sometimes he asked my opinion about something, and he talked to me about as much as he did to anybody else; he had a thousand questions to ask. We sat on a log to talk and in ten minutes, thirty-five people were sitting on the log. It was going to be a ten day hunt, but the President was impatient. “I must see a live bear the first day,” he said. I told him he would if I had to tie one and bring it to him.

The night before their hunt, the party sat around the camp fire and told stories of great hunts past. Roosevelt was the center of attention (as usual) and entertained the groups with his larger than life stories told in his fire and brimstone style. Other well known citizens of the day joining Collier and Roosevelt on the hunt were: Mississippi Governor Andrew Longino; Illinois Central Railroad president Stuyvesant Fish; Tobasco Sauce heir John McIlhenny; soon-to-be Louisiana Governor John M. Parker; Huger Foote, grandfather of Civil War authority Shelby Foote; and LeRoy Percy, who later became a U. S. Senator and was the great uncle of the late novelist Walker Percy.

The next morning Collier’s famous pack of dogs caught the scent of an old bear and tracked him for more than three hours. The dogs eventually backed the bear up in the waters of a sluggish bayou, but unfortunately, President Roosevelt was nowhere to be found. Before Collier could summon the President, the bear grabbed Collier’s favorite dog, a little yellow mongrel called Jocko. The bear was in the process of killing the dog and Collier couldn’t shoot without risking Jocko’s life. Gripping his rifle like a club, he leaped from the saddle and slammed the stock of the gun down on the bear’s skull. The bear laid semi-conscious in the muddy waters. What happened next launched Teddy Roosevelt from an admired President to an American Icon.

Determined to do his best to salvage the situation, Collier threw a rope over the comatose animal, dragged it out of the water and tied it to the nearest tree. Collier had lassoed a bear, just as he promised the President.

Holt sounded three blasts on his hunting horn to call in the President and the rest of the party. Expecting an heroic scene of fang and claw, Teddy could scarcely conceal his disappointment when he saw the incapacitated bear at Collier’s feet. A ravenous crowd of hunters that quickly gathered around.

“Shoot the bear! Shoot it, Mr. President!” members of the party shouted.

But Roosevelt, ever the skilled politician, knew that reporters were back in camp would have a field day with the story. His hunting had been criticized by many East Coast intellectuals and he knew the press’ judgment would be harsh. Roosevelt also knew the laws of the hunt and practiced good sportsmanship in the field. It was an injured animal and there would be nothing sporting about the kill. Roosevelt declined the shot, but ordered the bear put down to end its suffering.

Upon his return to Washington, Roosevelt sent Collier a gun, just like one he had used on his hunt and which Collier had admired. He also told Collier he was the best hunter and guide he had ever seen. 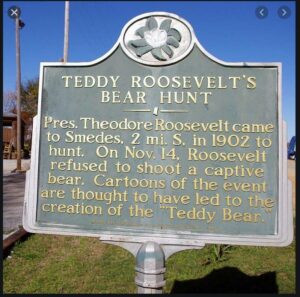 The events set off a public relations bonanza for Roosevelt. Political cartoonist Clifford Berryman popularized the event with the now famous cartoon he called “Drawing the Line in Mississippi,” a reference to Roosevelt’s rigid opposition to Southern positions on the racial questions of the day. Soon everyone in America was talking about Teddy and the bear. Enterprising toy maker Morris Michtom of New York named his new line of stuffed toys “Teddy Bears”. Riches soon followed. Today, Teddy Roosevelt is a beloved and well known figure in American History, in large part to the story of “Teddy’s Bear”. But for most Americans, the story of Holt Collier remains unknown.

Regardless, the life of Holt Collier is more than a footnote in a Presidential anecdote. He was a central figure in the sporting life of the Reconstruction South. He was a black man that was followed and respected by white men all across the South. He was arguably the most knowledgeable and skilled outdoorsman of the time and crossed boundaries that were off limits to most freed slaves. As the author, Minor Ferris Buchanan, wrote in his 2002 work, “Holt Collier”:

Social ranks and taboos of caste and class were suspended on the hunt, especially in such interior and frontier regions as the Mississippi Delta. At least temporarily, a man’s skill and courage were the only criterion for acceptance. In this gentleman’s pursuit Holt Collier was able to earn the respect of others and establish his own reputation as a giant among men. He earned honor as a hunter and guide irrespective of race. “Though the South had its gentlemen hunters like Wade Hampton, all down the line of its social ranks it had devotees of the sport. The small farmer, the frontiersman, the poor white—and frequently the Negro—all were hunters….In many localities certain Negroes or Indians were numbered among the expert nimrods of the community, and their society was at times apparently courted. Long before the advent of Jack Johnson and Willie Mays, hunting was a factor which promoted integration.” In the Mississippi Delta and perhaps throughout the entire South, no hunter was equal in skill or courage to Holt Collier. 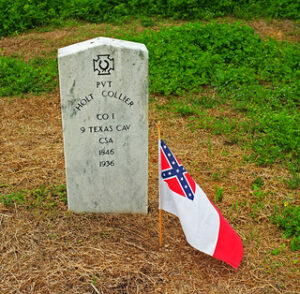 Collier died in Greenville, Mississippi in 1936. At 90 years of age, he outlived most of the bears that roamed the Delta country. He walked side by side with men of all races and backgrounds through woods, swamps, and prairies while earning their admiration and respect. An admiration that should still live on today.