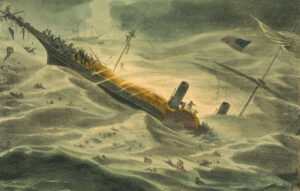 On 3 September 1857, 477 passengers and 101 crew left the Panamanian port of Colón, sailing for New York City under the command of William Lewis Herndon. The ship was heavily laden with 10 short tons (9.1 t) of gold prospected during the California Gold Rush. After a stop in Havana, the ship continued north. On 9 September 1857, the ship was caught up in a Category 2 hurricane while off the coast of the Carolinas. By 11 September, the 105 mph (165 km/h) winds and heavy seas had shredded its sails, she was taking on water, and her boiler was threatening to go out. A leak in one of the seals between the paddle wheel shafts and the ship’s sides sealed its fate, and, at noon that day, her boiler could no longer maintain the fire. Steam pressure dropped, shutting down both the pumps that had been keeping the water at bay and the paddle wheels that kept her pointed into the wind as the ship settled by the stern. The passengers and crew flew the ship’s flag upside down (a sign of distress in the United States) to try to signal a passing ship. No one came.
A bucket brigade was formed and her passengers and crew spent the night fighting a losing battle against the rising water. During the calm of the hurricane, attempts were made to get the boiler running again, but these all failed. The second half of the storm then struck. The ship was now on the verge of foundering. Without power, the ship was carried along with the storm, so the strong winds would not abate. The next morning, two ships were spotted, including the brig Marine. One-hundred fifty-three passengers, primarily women, and children managed to make their way over in lifeboats. However, the ship remained in an area of intense winds and heavy seas that pulled the ship and most of her company away from rescue and eventually sent the ship to the bottom at 8:00 that night. As a consequence of the sinking, 425 people were killed. A Norwegian bark, Ellen, rescued an additional fifty from the waters. Another three were picked up over a week later in a lifeboat.

In the immediate aftermath of the sinking, the greatest attention was paid to the loss of life, which was described as “appalling” and as having “no parallel” among American navigation disasters. At the time of her sinking, Central America carried gold then valued at approximately US$2 million (monetarily equivalent to $50,792,857 today). The loss shook public confidence in the economy and contributed to the Panic of 1857. The valuation of the ship itself was substantially less than those lost in other disasters of the period, being US$140,000 (equivalent to $3,555,500 today).

Commander William Lewis Herndon, a distinguished officer who had served during the Mexican–American War and explored the Amazon Valley, was captain of Central America. Commander Herndon went down with his ship. Two US Navy ships were later named USS Herndon in his honor, as was the town of Herndon, Virginia. Two years after the sinking, his daughter Ellen married Chester Alan Arthur, later the 21st President of the United States.

Banks across northeastern America failed from New York to Iowa and westward expansion halted. The southern states were minimally affected and recovered entirely in less than a year. Effects of the crisis lingered in northern states with a call for taxing (Tariffs) agricultural goods leaving ports for exports. (The northern states were broke, debt-laden, and jealous of southern prosperity)

“While the overall economic downturn was brief, the recovery was unequal, and the lasting impact was more political than economic. The panic began with a loss of confidence in an Ohio bank but spread as railroads failed, and fears that the US Federal Government would be unable to pay obligations in species mounted. More than 5,000 American businesses failed within a year, and unemployment was accompanied by protest meetings in urban areas. Eventually, the panic and depression spread to Europe, South America, and the Far East. No recovery was evident in the northern parts of the United States for a year and a half, and the full impact did not dissipate until the American Civil War.”

Causes
“The recession ended a period of prosperity and speculation that had followed the Mexican-American War and the discovery of gold in California in the late 1840s. Gold pouring into the American economy played its part by helping inflate the currency. Changes in worldwide economic trade, caused by the Crimean War between Britain and Russia, had pushed American firms into a precarious worldwide market. (McPherson, p. 189) The immediate event that touched off the panic was the failure on August 24 of the New York City branch of the Ohio Life Insurance and Trust Co., a major financial force that collapsed following widespread embezzlement. In the wake of this event, a series of other setbacks shook the public’s confidence, including:
* The decision of British investors to remove funds from U.S. banks, which raised questions about overall U.S. economic soundness
* The fall of grain prices, which spread economic misery into rural areas, because of the end of the Crimean War and Russian re-entry into global markets
* The collapse of land speculation programs that depended on new rail routes, ruining thousands of investors
These triggers lowered the value of stocks and bonds held by American banks, further reducing their investment assets. Investor confidence was further shaken in mid-September when 30,000 pounds (14,000 kg) of gold were lost at sea in a shipment from the San Francisco Mint to eastern banks. The gold and more than 400 lives were lost when the SS Central America sank during the North Carolina Hurricane of 1857. Public confidence in the government’s ability to back its paper currency with specie was shaken as well.”
Remedies
At the suggestion of Howell Cobb, Secretary of the Treasury, President James Buchanan proposed to Congress that the Treasury be authorized to sell revenue bonds for the first time since the Mexican-American War.
In October, a bank holiday was declared in New England and New York in a vain effort to avert runs on those institutions. The Tariff Act of 1857 reduced the average tariff rate to 15%. The reduction was written by Southerners in Congress and supported by most economic interests nationwide with the exception of sheep farmers and some iron companies in Pennsylvania.
1860 MORRILL TARIFF: In response to the slow recovery of northern states from the Financial Crisis of 1857, in May 1860, Congress passed the Morrill Tariff Act proposed by Republican Congressmen Justin Morrill (Former Whig). It raised the average agricultural tariff from 15% to 37%, with increases to 47% within 3 years. Only one southern representative voted for the Tariff. With U.S. Tariff Reviews already falling disproportionately on the southern states, accounting for 87% of the total BEFORE the Morrill Tariff! Even more galling was that 80% or more of these tax revenues were expended on Northern public works and industrial subsidies, thus further enriching the northern states at the expense of the south. Lincoln promised to sign the Morrill Tariff Act into law and enforce it as part of his agreement to defect from the Whig Party to the new Republican Party. The southern States began secession discussions and proceedings in anticipation.
27 September 1860, Republican Leader Thaddeus Stevens, sponsor of the Morrill Tariff, told a New York City audience that “the Tariff would impoverish the southern and western states, but that was essential for advancing national greatness and the prosperity of industrial workers.” Northern Republicans and Whigs cheered, Southern leaders were indignant and called for nullification and/or Secession. Enforcement of the tariffs was the twelfth of the seventeen planks in the platform of the incoming Republican Party.
October 11, 1860, In an editorial in the Charleston Mercury, “To plunder the South for the benefit of the North, by a new Protective Tariff, will be one of their first measures of Northern sectional dominion,” the paper announced.
Charleston Mercury, 11 Oct. 1860.
14 Feb 1861, New York Times page 4, para 2 “No act of this kind should become law,” (Morrill Tariff) “All admit the breaking up of the Confederacy to be possible.” Para 5: “This proposed bill (Morrill Tariff) is most objectionable both in its principle and in its details, uniting specific and ad Valorem duties such minuteness of subdivisions and detail as to give rise to endless misunderstandings and disputes and rendering necessary, with our present imports, a force at least treble that now employed.” (Even The New York Times thought Lincoln’s pledge to enforce the Morrill Tariff was illegal and would cause a secession crisis, The Times was correct.)
Biography
https://www.loc.gov/rr/program/bib/ourdocs/morrill.html
* Huston, James L. (1987). The Panic of 1857 and The Coming of the Civil War. Baton Rouge: Louisiana State University Press. ISBN 0807113689.
* McPherson, James M. (2003). Battle Cry of Freedom: The Civil War Era. New York: Oxford University Press. ISBN 0195038630.
* Sobel, Robert (1973). “The Panic of 57”, Machines and Morality: The 1850s. New York: Crowell. ISBN 0690002661.
* Stampp, Kenneth (1990). America in 1857: A Nation on the Brink. New York: Oxford University Press. ISBN 0195039025.
* The Tribune Papers (2014). True Causes of the Civil War: Understanding the Morrill Tariff