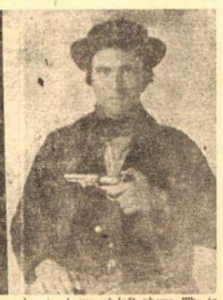 Pictured is Private Hiram Taylor Kersey of Cannon County, Tennessee who was only thirteen years old in May of 1861 when he enlisted in Company A of Colonel John Savage’s 16th Tennessee Volunteer Infantry Regiment. A mere boy, Kersey was the youngest son of the widow Margaret (Peggy) Kersey. His older brother and two cousins served in the same company with the young private Kersey, however, his brother, Calvin, deserted on October 14th, 1863 and one cousin would be killed in the Battle of Perryville, the other at the Battle of Franklin.

Private Kersey was noted as absent from his regiment fifteen days prior to the January/February 1863 muster,- shortly after the Battle of Murfreesboro. He was officially listed as a “deserter” on August 4th, 1863.

Feeling that his home was unprotected from the federals, and his mother’s home having been raided, -he up and walked away from the war on 4 August 1863 and returned to the Short Mountain area of Cannon and DeKalb Counties. Assuming his nickname “Pomp” Kersey, he gathered about a dozen others who thought as he did and became a celebrated leader of Confederate irregulars, known as the ‘Short Mountain Bushwhackers’, sworn to protect Confederate families. They appear to have operated mainly in DeKalb County, with Smithville and Liberty receiving most of their attention. (This band numbered 10 to 15, with some as young as 13. Also, he was thought to have been joined by his brother Calvin.)

As with many who operated behind the lines, Kersey and his followers lost favor with some due to their unconventional actions. They openly robbed accused unionists near Liberty, Tennessee, and murdered a 66-year-old man who was known for his Union sympathy but remained respected in the community. During a raid on some federals who had shown up in Smithville, Kersey, using hit and run tactics killed eight Yankees before dashing away, pleasing the town folk. But Pomp Kersey would remain a troublesome figure for all involved.

Mr. Foster of Smithville lived in the town square and voted “No Separation” during the decision on secession, although two of his sons were in the Confederate Army. Knowing this Kersey came to the Foster home and choked Mr. Foster and his wife until he was given money. Returning again, he shot a visitor’s horse and Foster’s cow, again choking him for money. It became noted that no matter if Pomp Kersey was seen as a protector when he or his men needed money, they were not particular as to which side, North or South, one might subscribe to; still his loyalty remained staunchly pro-Southern.

After another raid Kersey’s band was finally caught sleeping, on July 24th, 1864, two escaped, and five were killed in the first volleys, another was killed while trying to escape. Kersey tried to mount his horse, but the halter was tied. A Union lieutenant named Thomas Bratten put his rifle against Kersey’s back and pulled the trigger, it failed to fire. Kersey jumped into the bushes pulling out his pistol but was shot simultaneously by Bratten and Captain William Hathaway.

His body was publicly displayed in Liberty, Tennessee by the Yankees, and along with his men, was buried at Daniel Smith’s farm near Liberty. His remains were exhumed from the original resting place after the war by friends and relatives and reburied in Melton Cemetery near Short Mountain, Cannon County, Tennessee.

Both a Confederate veteran marker on his grave and a State historical marker now note his burial location and story.