This article is a part of our exclusive October Series

The text presented here is a direct excerpt from the original documents to the most of accuracies,
including all formatting so that the text is not skewed, nor altered for sake of preservation.
View the imagery to see digitized scanned copies of original documents.

John Aldin Senior , of Boston, in the County of Suffolk, Mariner, on the 28th Day of May, 1692, was sent for by the Magistrates of Salem, in the County of Essex, upon the Accusation of a company of poor distracted, or possessed Creatures or Witches; and being sent by Mr. Stoughton , arrived there the 31st of May, and appeared at Salem-Village, before Mr. Gidney , Mr. Hathorn, and Mr. Curwin.

Those Wenches being present, who plaid their jugling tricks, falling down, crying out, and staring in Peoples Faces; the Magi- strates demanded of them several times, who it was of all the People in the Room that hurt them? one of these Accusers pointed several times at one Captain Hill , there present, but spake nothing; the same Accuser had a Man standing at her back to hold her up; he stooped down to her Ear, then she cried out, Aldin , Aldin afflicted her; one of the Magistrates asked her if she had ever seen Aldin, she answered no, he asked her how she knew it was Aldin ? She said, the Man told her so.

Then all were ordered to go down into the Street, where a Ring was made; and the same Accuser cried out, “there stands Aldin , a bold fellow with his Hat on before the Judges, he sells Powder and Shot to the Indians and French, and lies with the Indian Squaes, and has Indian Papooses.” Then was Aldin committed to the Marshal’s Custody, and his Sword taken from him; for they said he afflicted them with his Sword. After some hours Aldin was sent for to the Meeting-house in the Village before the Magistrates; who required Aldin to stand upon a Chair, to the open view of all the People.

The Accusers cried out that Aldin did pinch them, then, when he stood upon the Chair, in the sight of all the People, a good way distant from them, one of the Magistrates bid the Marshal to hold open Aldin’s hands, that he might not pinch those Creatures. Aldin asked them why they should think that he should come to that Village to afflict those persons that he never knew or saw before? Mr. Gidney bid Aldin confess, and give glory to God; Aldin said he hoped he should give glory to God, and hoped he should never gratifie the Devil; but appealed to all that ever knew him, if they ever suspected him to be such a person, and challenged any one, that could bring in any thing upon their own knowledge, that might give suspicion of his being such an one. Mr. Gidney said he had known Aldin many Years, and had been at Sea with him, and al- ways look’d upon him to be an honest Man, but now he did see cause to alter his judgment: Aldin answered, he was sorry for that, but he hoped God would clear up his Innocency, that he would recall that judgment again, and added that he hoped that he should with Job maintain his Integrity till he died. They bid Aldin look upon the Accusers, which he did, and then they fell down. Aldin asked Mr. Gidney, what Reason there could be given, why Aldin’s looking upon him did not strike him down as well; but no reason was given that I heard. But the Accusers were brought to Aldin to touch them, and this touch they said made them well. Aldin began to speak of the Providence of God in suffering these Creatures to accuse Innocent persons. Mr. Noyes asked Aldin why he would offer to speak of the Providence of God. God by his Providence (said Mr. Noyes ) governs the World, and keeps it in peace; and so went on with Discourse, and stopt Aldin’s mouth, as to that. Aldin told Mr. Gidney, that he could assure him that there was a lying Spirit in them, for I can assure you that there is not a word of truth in all these say of me. But Aldin was again committed to the Marshal, and his Mittimus written, which was as follows. To Boston Aldin was carried by a Constable, no Bail would be taken for him; but was delivered to the Prison-keeper, where he remained Fifteen Weeks; and then observing the manner of Tryals, and Evidence then taken, was at length prevailed with to make his Escape, and being returned, was bound over to Answer at the Superiour Court at Boston, the last Tuesday in April, Anno, 1693. And was there cleared by Proclamation, none appearing against him. Per. John Aldin.

Warrant for the Apprehension of John Alden & Officer’s Return 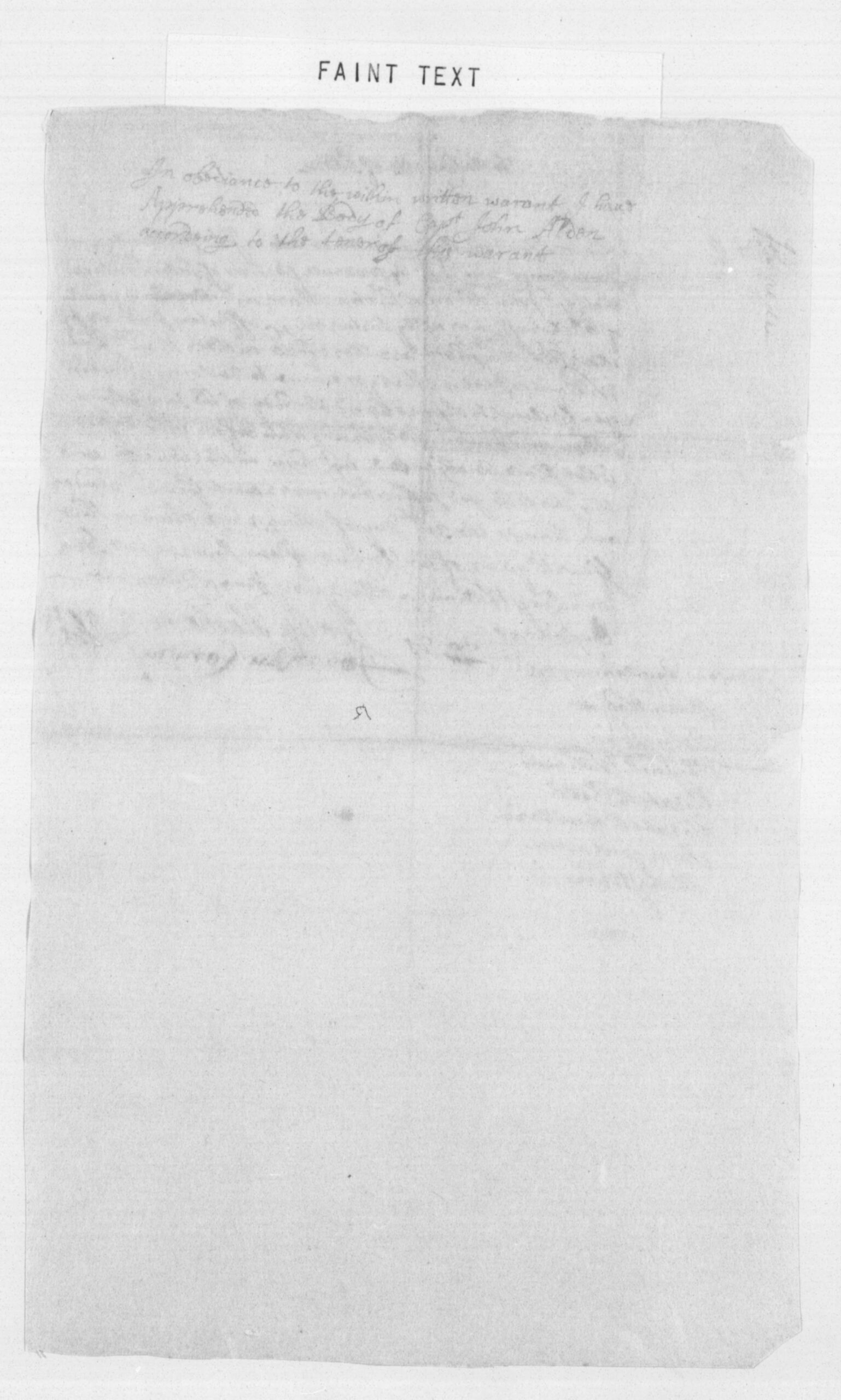 To the Constable of Salem

To Mr. John Arnold , Keeper of the Prison in Boston, in the County of Suffolk.

Whereas Captain John Aldin of Boston, Marriner, and Sarah Rice , Wife of Nicholas Rice of Reding, Husbandman, have been this day brought before us, John Hathorn and Jonathan Curwin , Esquires; being accused and suspected of perpetrating divers acts of Witchcraft, contrary to the form of the Statute, in that Case made and provided: These are therefore in Their Majesties, King William and Queen Marys Names, to Will and require you, to take into your Custody, the bodies of the said John Aldin , and Sarah Rice , and them safely keep, until they shall thence be delivered by due course of Law; as you will answer the contrary at your peril; and this shall be your sufficient Warrant. Given under our hands at Salem Village, the 31st of May, in the Fourth Year of the Reign of our Sovereign Lord and Lady, William and Mary, now King and Queen over England, etc., Anno Dom. 1692. John Hathorn , Jonathan Curwin , { Assistants . To Boston Aldin was carried by a Constable, no Bail would be taken for him; but was delivered to the Prison-keeper, where he re- mained Fifteen Weeks; and then observing the manner of Tryals, and Evidence then taken, was at length prevailed with to make his Escape, and being returned, was bound over to Answer at the Supe- rior Court at Boston, the last Tuesday in April, Anno 1693. And was there cleared by Proclamation, none appearing against him. Per John Aldin. 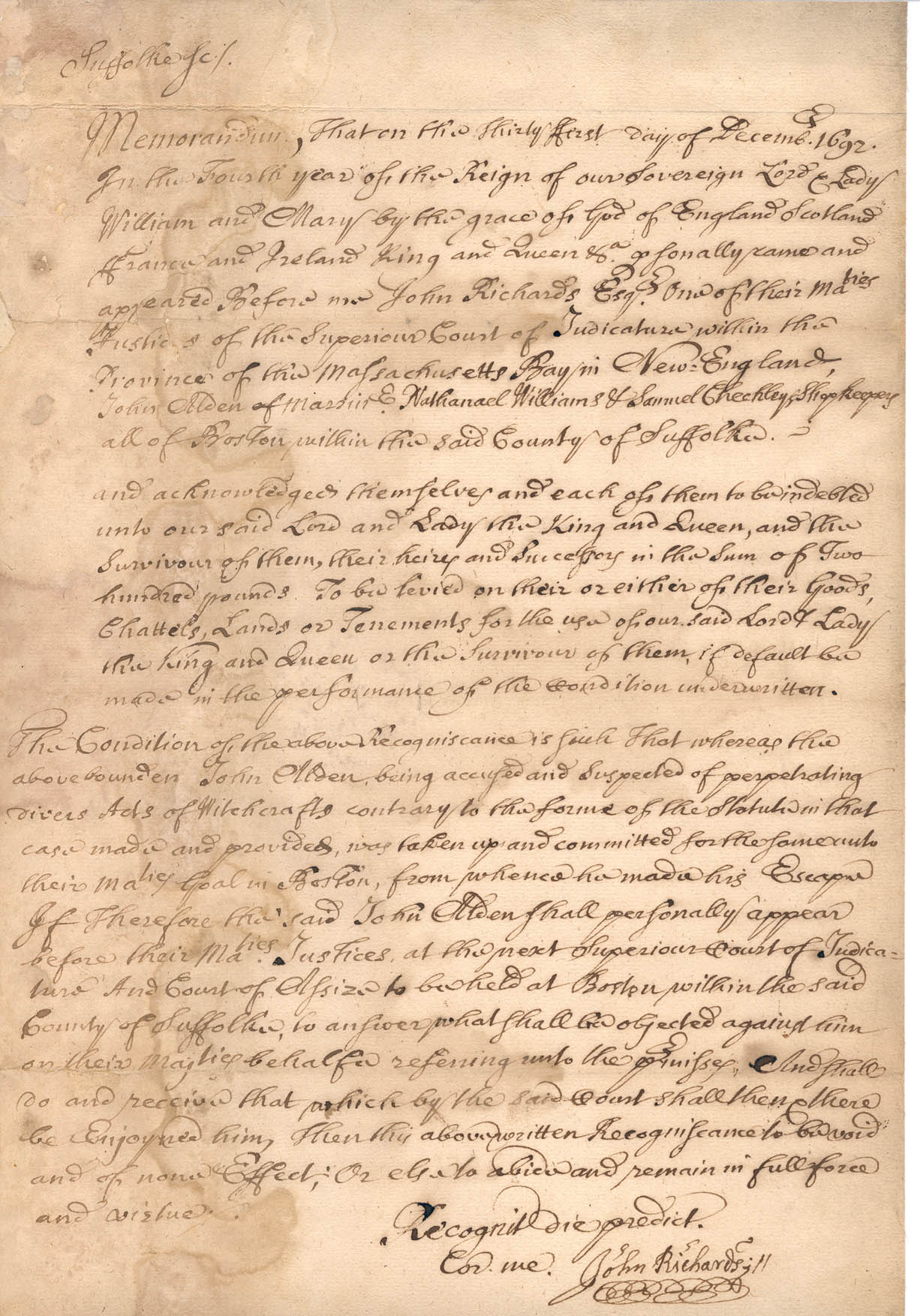 Memorandum, That on the Thirty First day of Decemb’r 1692. In the Fourth year of the Reign of our Sovereign Lord & Lady William and Mary by the grace of God of England Scotland France and Ireland King and Queen &c p’sonally came and appeared Before me John Richards Esq’r One of their Ma’ties Justices of the Superiour Court of Judicature within the Province of the Massachusetts Bay in New England, John Alden #[of] Marrin’r Nathanael Williams & Samuel Chechley, Shopkeepers all of Boston within the said County of Suffolk.

and acknowledged themselves and each of them to be indebted unto our said Lord and Lady the King and Queen, and the Survivour of them, their heires and Successors in the Sum of Two hundred pounds To be levied on their or either of their Goods, Chattels, Lands or Tenements for the use of our said Lord & Lady the King and Queen or the Survivour of them, if default be made in the performance of the Condition underwritten.

The Condition of the above Recogniscance is such That whereas the abovebounden John Alden , being accused and Suspected of perpetrating divers Acts of Witchcrafts contrary to the forme of the Statute in that case made and provided, was taken up and committed for the same unto their Ma’ties Goal in Boston, from whence he made his Escape If Therefore the said John Alden shall personally appear before their Ma’ties Justices, at the next Superiour Court of Judicature and Court of Assize to be held at Boston within the said County of Suffolke, to answer what shall be objected against him on their Maj’ties behalfe referring unto the p’rmisses, And shall do and receive that which by the said Court shall then & there be Enjoyned him, Then this abovewritten Recogniscance to be void and of none Effect; Or else to abide and remain in full force and virtue./.