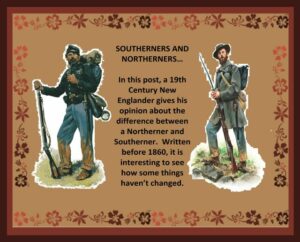 Our own race is boastful as well as intolerant and aggressive. This is especially true of the New England type, and hence it is that we are prone to regard ourselves in many, if not all respects, superior to the people of the South. In some respects, undoubtedly, we have the advantage of those who have been born and educated under a very different social system; but, on the other hand, according to the law of compensation, we lack much that is valuable in the Southern character and mental constitution.
The nature of our climate and more especially of our institutions has given to our English blood a new and most powerful stimulus. So that we develop an immense amount of intellectual energy and activity, which constantly seeks vent, and which constantly tends to run into some extreme or excess. Having lived for many years in a state of great material prosperity, we are prone to wax fat and kick. We have known no real evils, no invasion from without, or civil war within, and for want of any real danger we conjure up those that are imaginary. We torment ourselves with evils, which have no existence but in our own brains. I think it was Judge Marshall who speaks of these imaginary evils, which as they are without cause are also without remedy.
The Southern mind is less active and more conservative, sometimes erratic, but generally disposed to take a common sense and rational view of things, and is, in some respect, more reliable than our own. It forms an admirable check-in our political system, and preserves us from a natural tendency to run into the extreme of radicalism, and that spirit of agrarianism which has destroyed all former Republics…
The Southern character is more impulsive, but also more open and genial than our own. If it shows a hasty spar, it is also soon cold and rational again. It is not brooding and intolerant, nor easily led away into excesses, such as too often befall us of a more Northern Clime. One prominent cause from such difference is no doubt to be found in the fact that, while we, at the North, live in town and cities where men are in a constant state of action and reaction upon each other and the masses can be suddenly and extensively roused and excited, the southern Planter lives remote from each other and in many cases, in almost entire seclusion.
Sources:
“Slavery” by J.L. Baker
E-Book