Under the newly enacted Constitution, George Washington was elected president twice with little drama. It was unknown if Washington would seek a third term until less than two months before Election Day. Washington said on September 17, 1796, he wouldn’t seek a third term, in his well-crafted Farewell Address to the American public, written with some help from Alexander Hamilton and James Madison. With that announcement, it became certain the 1796 election on November 4, 1796, would be the first race contested by divided political parties with separate candidates for office, a fact not lost on Washington.

“They serve to organize faction, to give it an artificial and extraordinary force; to put, in the place of the delegated will of the nation the will of a party, often a small but artful and enterprising minority of the community,” he said in his Farewell Address. “They are likely, in the course of time and things, to become potent engines, by which cunning, ambitious, and unprincipled men will be enabled to subvert the power of the people and to usurp for themselves the reins of government, destroying afterward the very engines which have lifted them to unjust dominion.”

The campaign featured Vice President Adams of the Federalist Party and former Secretary of State Jefferson of what was called the Republican Party and quickly descended into mudslinging between their supporters. (Back then, it wasn’t proper for candidates to campaign directly for office, but Aaron Burr, Jefferson’s running mate, campaigned anyway.)

On October 19, 1796, a mysterious editorial from a writer named Phocion appeared in the Gazette of the United States, a popular Federalist newspaper in Philadelphia. Phocion said, in terms understood by most readers, that presidential candidate Jefferson was having an affair with one of his female slaves. Phocion also accused Jefferson of running away from British troops during the Revolution, unlike his brave friend Alexander Hamilton. Phocion also paid compliment after compliment to Adams and claimed Jefferson would emancipate all slaves if he were elected president.

In reality, Phocion was Alexander Hamilton. 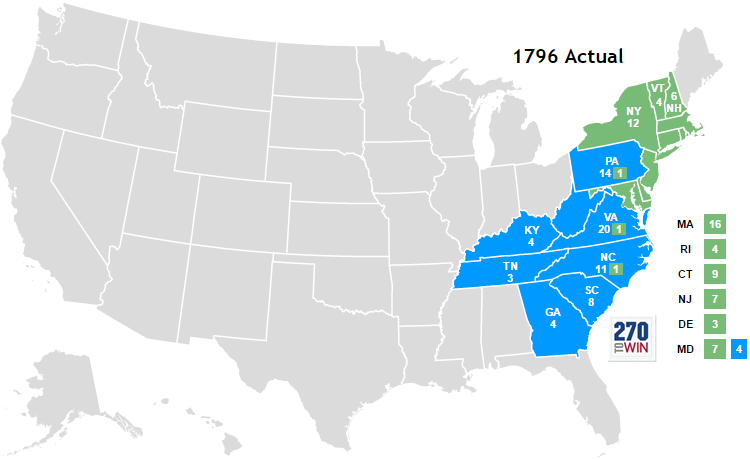 Jefferson’s folks had been using their own strong campaign tactics in the fight against Adams. Adams was accused of wanting to be a king and starting a dynasty by having his son succeed him as President. He was also accused of being overweight and given the nickname “His Rotundity.”

In addition to the insults, there was high drama inside the Federalist camp, where Hamilton secretly worked to have Adams’ running mate, Thomas Pinckney of South Carolina, win the election by getting southern Federalists to withhold their votes for Adams. In the original election system set up in 1787, each elector cast two votes, and the top two candidates became president and vice president. Six states had direct popular elections, but 10 others let state legislatures choose the electors. That would have made Pinckney the president and Adams the vice president, if several Federalists voted for Pinckney and another candidate, like Samuel Adams.

Instead, Hamilton’s secret was discovered in New England, a region that had many more Federalists. Those electors refused to cast their second vote for Pinckney. The result was that Adams became president and his former-friend-turned-rival, Jefferson, became vice president. Adams defeated Jefferson by three electoral votes and he gained an electoral majority by just one vote. Adams then wound up blaming Hamilton and Jefferson for his close victory, and he particularly targeted Hamilton for plotting Adams’ near-defeat.

The bitterness and rivalries seen in the partisan 1796 campaign got worse in the 1800 rematch between Adams and Jefferson. At one point in that race, Jefferson’s supporter, notorious pamphleteer James Calendar, claimed that Adams was a hermaphrodite, while Adams’ people said Jefferson would openly promote prostitution, incest, and adultery. That 1800 race ended in a tie fueled by deeply partisan tactics and more plotting by Adams, Hamilton, Jefferson, and Burr. Jefferson was chosen over Burr in the House runoff election after Hamilton decided to support the man he once railed against as Phocion.

The result was the passage of the 12th Amendment, which changed the original presidential voting system passed in 1787 to eliminate the two-vote system. It was ratified in June 1804, just a month before Burr killed Hamilton in their famous duel.