It is accepted among some historians that Hessian soldiers who fought alongside the British first introduced the Christmas tree to the colonies during the Revolutionary War. Others claim German immigrants who settled in Eastern Pennsylvania started the tradition. All agree that prior to the Revolutionary War, Christmas was not celebrated with much merriment and outward adornment, as this did not befit the proper Puritan of that day. Christmas celebrations were regarded as tributes to the practice of Bacchanalia-the worship of Dionysus, whom the Romans called Bacchus-and were therefore sacrilegious.

Some colonists did not hold to the Puritanical ban however. Philip Fithian, of colonial Virginia, recorded in his diary entry for December 18, 1773: “When it grew to dark to dance….we conversed til half after six; Nothing is now to be heard of in conversation, but the Balls, the Fox-hunts, the fine entertainments, and the good fellowship, which are to be exhibited at the approaching Christmas.” 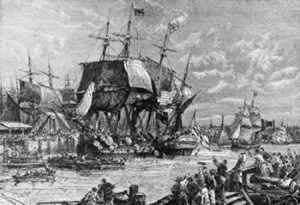 Fithian’s Christmas Eve, 1775 diary entry from Staunton, Virginia, described other common pastimes of the holiday celebration: “The Evening I spent at Mr. Guys-I sung for an Hour, at the good Peoples Desire, Mr. Watts admirable Hymns-I myself was entertained; I felt myself improved; so much Love to Jesus is set forth-So much divine Exercise.”

The month of December was ironically a turning point many times during the war. It was on November 28, 1775 that Congress established The American Navy. December 23rd of that same year King George III issued a royal proclamation closing the American colonies to all commerce and trade, to take effect in March of 1776. Also in December, Congress was informed that France might offer support in the war against Britain.

On January 5, 1776, the assembly of New Hampshire adopted the first American state constitution. It was on January 9, 1776, that Thomas Paine’s “Common Sense” was published in Philadelphia. Paine criticized King George III and attacked allegiance to Monarchy in principle while providing strong arguments for American independence. “We have it in our power to begin the world anew…America shall make a stand, not for herself alone, but for the world,” Paine wrote.

On December 6, 1776, the British captured the naval base at Newport, Rhode Island. On the 11th of that month, Washington took his troops across the Delaware River into Pennsylvania. The next day, over concerns of a possible British attack, the Continental Congress abandoned Philadelphia for Baltimore. Among Washington’s troops was the infamous Thomas Paine, who wrote of that event, “These are the times that try men’s souls: The summer soldier and the sunshine patriot will, in this crisis, shrink from the service of his country: but he that stands it now deserves the love and thanks of man and woman. Tyranny, like Hell, is not easily conquered. Yet we have this consolation with us, that the harder the conflict, the more glorious the triumph.”

December 25, 1776, saw George Washington taking 2400 of his men and re-crossing the Delaware River-this time to conduct a surprise raid on 1500 British-Hessians (German mercenaries) at Trenton, New Jersey. The Hessians surrendered after an hour with nearly 1000 taken prisoner by Washington who suffered only six wounded (including future president Lt. James Monroe). Washington reoccupied Trenton. Only a week later, January 3, 1777, Washington celebrated a second victory as his troops defeated the British at Princeton and drove them back toward New Brunswick. Washington then established winter quarters at Morristown, New Jersey. During the harsh winter, Washington’s army shrank to about a thousand men as enlistment periods expired and deserters fled the hardships. By spring, with the arrival of recruits, Washington had 9000 men.

Of that turning point in the war, Mark Alexander wrote in The Collegiate Patriot (Dec. 22, 2002): “Indeed, our first national Christmases tell the tale of the Revolutionary War’s ebb and flow. The so-called Christmas Campaign successes of 1776 at Trenton and Princeton were presaged by General George Washington’s writings of December 18: ‘If every nerve is not strained to recruit the New Army with all possible Expedition I think the game is pretty near up….No Man I believe ever had a greater choice of difficulties & less the means of extricating himself than I have-However under a full prestation of the justice of our Cause I cannot but think the prospect will brighten.’ But these surprising victories were followed a year later by the Revolutionary Army’s retreat to Valley Forge, the trail marked by bloody footprints in the snow. Washington’s discouragement was evident in his writing of ‘A character to lose-an estate to forfeit-the inestimable blessing of liberty at stake-and a life devoted, must be my excuse,’ and about how ‘it was much easier to draw up remonstrances in a comfortable room by a good fire-side, than to occupy a cold bleak hill, and sleep under frost and snow, without clothes or blankets.’” 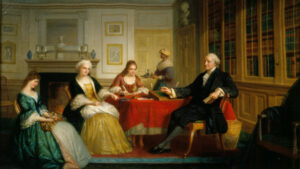 It was also at Christmas-1783-that General George Washington chose to step down as leader of the Revolutionary Army. Author Stanley Weintraub wrote in his book “General Washington’s Christmas Farewell”: “In late November 1783 when Washington finally received formal notice of the signing of a peace treaty with England he had little more than a month to accept the transfer of power from British troops in New York; to bid farewell to his troops; and to resign his commission to Congress if he hoped to make it to Mount Vernon for Christmas. He could have remained in charge of the army and become a virtual king to the Americans who loved him. Control of the newly forming government was his to take – yet he chose to resign. It was that decision, coupled with his later decision to step down from the presidency after two terms, that rendered him ‘the greatest character of the age’ (according to none other than King George III).

Washington’s homeward journey is one of the most moving and inspiring stories from his great and eventful life. When he bade farewell to his troops at Frances Tavern in New York City there were no dry eyes. When he reached Congress and gave a retirement speech, it cemented his greatness more fully than had his victory over the British. When he made it to Mount Vernon, finally, on Christmas Eve, it could not have been a happier homecoming.”

It can be said, indeed, it is being said by this author, that Christmas has not only brought us the Prince of Peace, it has also brought us the freedom to worship the prince of Peace in the manner which we as a free nation choose. The fight for individual freedom for all Americans would come less than a century later.