1 – Human Slavery has Likely Existed Since the Beginning of Time.

The Code of Hammurabi (1760 BC), refers to slavery as an established institution. In the Bible, Joseph’s 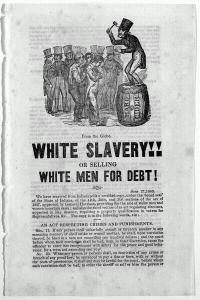 jealous brothers sold him into slavery. The Israelites were enslaved by the Egyptians for 400 years and finally freed by Moses in his famous Exodus. In the New Testament book of Philemon, the apostle Paul enjoins a Christian slave-owner to treat his runaway slave, Onesimus, like a brother. In the book of I Corinthians, Paul tells the church that “bond and free” Christians are to be treated equally. Roman society, which flourished in Biblical times, was built on the backs of slaves. The famous Roman Coliseum, for example, was constructed primarily by slave-labor from captive Jews. Beginning in 793 A.D., Vikings from Scandinavia captured thousands of Irish and Scottish civilians, enslaving them. The women were used for sex and as domestic workers while the men were used for manual labor. The Viking culture was built on slavery.

2 – Millions of White Europeans were Enslaved by Muslims. 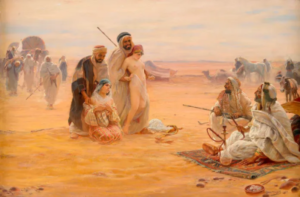 Christopher Hitchens wrote: “How many know that perhaps 1.5 million Europeans were enslaved in Islamic North Africa between 1530 and 1780?” For centuries, the so-called Islamic Empire (a loose federation of countries now known as Egypt, Algeria, Tunis, and Libya) enslaved millions of white Europeans. In fact, the Empire grew wealthy due in part to the slave trade. Pirates from these and other Arabic countries raided coastal villages in Europe (France, Spain, Portugal, England, etc.) in search of slaves. They also captured thousands of ships, selling the cargo and enslaving the crews. It is estimated that about 2.5 million Europeans were enslaved by the Empire from 1450 to 1830. Conditions endured by these victims were brutal to the extreme—women were used as concubines while many men were forced to become eunuchs. The Barbary Wars, fought in the early 1800s by the Americans and some European allies, effectively ended the practice of enslaving and ransoming crews of American ships. In 1830, France conquered Algiers, making it a colony and ending the rampant slave trade there.

From prehistoric times, slavery thrived in Africa. The practice likely began when warring clans captured rivals, enslaving them. For thousands of years, slavery was a major part of the African economy. Beginning in the 7th century, clans and wealthy families sold hundreds of thousands of slaves to Arab traders. In addition, Islamic pirates captured millions of Africans and sold them into slavery. In the 12th century, Europeans began to trade for black slaves that were carried back to Europe. Beginning in the 16th century, English ships transported African slaves to the New World. Soon New England slavers established their own slave routes to and from Africa. These slaves were not hunted down by whites, but obtained through trading with local clans and warlords. In “Slavery in Africa,” Donald R. Wright states that “West and west central African states, already involved in slave trading, supplied the Europeans with African slaves for export across the Atlantic.” Today, UNICEF reports that slavery still exists in Africa.

4 – Millions of “Indians” Were Enslaved by Whites.

Christopher Columbus took Indians (natives misnamed because he thought he’d found India) back to Europe where they were enslaved. The Spanish conquerors of South America captured millions of Indians and used them to perform manual labor. In Florida alone, Hernando de Soto seized thousands of natives which he used as slaves. In the 1600’s, New England colonists enslaved hundreds of troublesome Pequot Indians who objected to encroachment on their territory. Since these Indian slaves were considered “dangerous and revengeful,” many were transported to the West Indies and exchanged for “Negro” slaves, thought of as more compliant. John Winthrop, governor of Massachusetts, kept American Indians as slaves and doled others out to those who requested them. Winthrop also helped write the first law making slavery legal in the United States.

5 – Agriculture was a Driving Force for Slavery in the South.

As the fledgling United States began, all Southern and Northern states codified their laws so that individuals could legally own slaves. (Georgia was the last Southern state to do so since James Edward Ogelthorpe, one of its founders, opposed slavery.) Approximately twelve million Africans were brought to the Americas, but most were shipped to Brazil and the West Indies, where sugar plantations were plentiful. The 1793 invention of the cotton gin, a machine that sped up the process of removing seeds from cotton fiber, jump-started slavery in the South. According to the 1860 census, one year before the start of the War Between the States, 8% of Americans, including southerners and northerners, owned slaves. The total number of slaves in America in 1860 was listed as 3,950,528. Of 31 million Americans, nearly 400,000 owned slaves. At the time, 476,748 free blacks were listed. The vast majority of southerners did not own slaves, and many opposed the institution.

Yes, Virginia, blacks owned slaves. This fact has been suppressed by historians because it does not fit the politically correct narrative. For example, in 1830, two South Carolina blacks (Justus Angel and Mistress L. Horry) each owned 84 slaves. In the 1830 census, 3,775 blacks owned 12,740 black slaves. In 1860, in Charleston, South Carolina, 125 free blacks owned slaves. In New Orleans, approximately 25% of slaves were owned by freed blacks. Antoine Dubuclet was a black sugar planter in Louisiana who owned more than 100 slaves. William Ellison, a former slave freed by his owner, became one of the largest and wealthiest slave-owners in South Carolina. He was also a slave-breeder, something looked down on by both blacks and whites. Ellison supported the Confederacy during the Civil War, and one of his sons, Buckner, fought in the 1st South Carolina Artillery. Buckner Ellison was wounded in action in 1863. From the early 1800s to the defeat of the Confederate States of America, thousands of freed blacks owned slaves.

7 – Slavery Existed in the Northern States Even After the Civil War.

Slavery in the northern states began long before the American Revolution. Many of those instrumental in the creation of the United States owned or sold slaves. For instance, Dudley Saltenstall, progenitor of many New England politicians and governors, made much of his money as a slaver. William Penn, who wrote Pennsylvania’s then-liberal constitution, owned slaves. Slavery in many New England states was not abolished until long after the Revolutionary War. In the late 1700’s, nearly twenty percent of New York City’s population were slaves. The City Council passed a law appointing a place where “all Negro and Indian slaves” should be sold. This was near today’s Wall Street Stock Exchange. While slavery became illegal in New York in 1827, it continued on. In 1857, the New York Journal of Commerce wrote: “Downtown merchants of wealth and respectability are extensively engaged in buying and selling African Negroes and have been, with comparatively little interruption, for an indefinite number of years.” Slavery was still legal in some northern states (i. e., Delaware, Maryland, Kentucky, and Missouri) until December 1865, nearly a year after the end of the Civil War.

8 – Slavery in the United States of America Only Ended After the Civil War.

The 13th Amendment ratified on December 6, 1865 (eight months after the end of the Civil War), abolished legalized slavery in the United States of America. NOTE: By the time of the passage of the 13th Amendment, slavery had already ended in the former Confederate States of America. Abraham Lincoln’s Emancipation Proclamation, issued on September 22, 1862, applied only to Southern states. In fact, History.com states that in 1863, “there were an estimated 800,000 slaves in border states and some 3 million more in Confederate states.” On April 8, 1864, during the war, the United States Congress voted NOT to ratify the 13th Amendment. Slavery in the South ended on April 1865, when the war ended, but legally continued in northern states until December 1865.