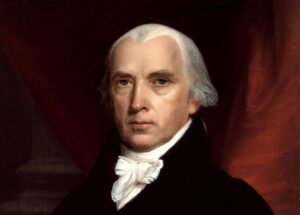 Here’s what James Madison had to say in Federalist #46. The Influence of the State and Federal Governments Compared:

“Should an unwarrantable measure of the federal government be unpopular in particular States, which would seldom fail to be the case, or even a warrantable measure be so, which may sometimes be the case, the means of opposition to it are powerful and at hand. The disquietude of the people; their repugnance and, perhaps refusal to cooperate with officers of the Union, the frowns of the executive magistracy of the State; the embarrassment created by legislative devices, which would often be added on such occasions, would oppose, in any State, very serious impediments; and were the sentiments of several adjoining States happen to be in Union, would present obstructions which the federal government would hardly be willing to encounter.”

Let me translate.  Madison said that when the federal government passes an unconstitutional measure there are powerful methods to oppose it – amongst the people and in the states.  He also pointed out that those methods were available even for warrantable, that is constitutional, measures.

Madison told us of four things that should be done to resist federal powers, whether merely unpopular, or unconstitutional.

1. Disquietude of the people – Madison expected the people would throw a fit when the feds usurped power – even using the word “repugnance” to describe their displeasure. That leads to the next step.

2. Repugnance and Refusal to co-operate with the officers of the Union – Noncompliance. The #1 dictionary of the time defined repugnance as “disobedient; not obsequious” (compliant). If you want to stop the federal government, you have to disobey them. Madison also suggested that people would perhaps directly refuse to cooperate with federal agents. This is an approach we preach here every day at the Tenth Amendment Center. James Madison apparently knew what we know today. The feds rely on cooperation from state and local governments, as well as individuals. When enough people refuse to comply, they simply can’t enforce their so-called laws.

3, The frowns of the executive magistracy of the State – Here Madison envisions governors formally protesting federal actions. This not only raises public awareness; executive leadership will also lead to the next step – legislative action.

4. Legislative devices, which would often be added on such occasions – Madison keeps this open-ended, and in the years soon after, which I’ll cover shortly, we learn how both he and Thomas Jefferson applied this step.

Madison also told us that if several adjoining States would do the same it would be an effective tool to stop federal acts.  To repeat, he said that doing this “would present obstructions which the federal government would hardly be willing to encounter.”

Judge Andrew Napolitano agreed recently and said that people need to stop enforcing unconstitutional federal laws.  He also said that if you could get an entire state doing this, it would make federal laws “nearly impossible to enforce.”

What’s important to note here, are some glaring omissions.  The powerful means that Madison told us would be used to oppose federal power successfully did NOT include federal lawsuits in federal courts.  He also did NOT include “voting the bums out” as a strategy, either.

Compare that with how people generally respond to what they consider unconstitutional or unpopular federal acts today.

The first thing I tend to hear from people who are opposed to a federal act is the “vote the bums out” mantra.  We’ll fire congress, right?

Or some people tell us we have to sue and let the courts decide.

I’ve got some news for you.  There’s nothing from the founders – anywhere – in which they tell us that our first response to extreme, repeated violations of the constitution and liberty is to vote the bums out, or sue the feds in federal court.  Nothing.

Thomas Jefferson followed up on this in 1798 with the same kind of advice.  That year, the Adams administration passed a wildly unconstitutional attack on the freedom of speech with the Alien and Sedition Acts.  In response, while sitting as vice-president, Jefferson secretly drafted the Kentucky Resolutions, and here’s a little of what he wrote:

“The several states composing the united states of america are not united on a principle of unlimited submission to their general government.”

“where powers are assumed which have not been delegated, a nullification of the act is the rightful remedy”

“that every State has a natural right in cases not within the compact to nullify of their own authority all assumptions of power by others within their limits: that without this right, they would be under the dominion, absolute and unlimited, of whosoever might exercise this right of judgment for them”

Madison was consistent in his views on this.  In 1798, he also drafted and help pass something known as the Virginia Resolutions, a state-level “legislative device” in response to the Alien and Sedition Acts. Here’s a key part:

in case of a deliberate, palpable, and dangerous exercise of other powers, not granted by the said compact, the states who are parties thereto, have the right, and are in duty bound, to interpose for arresting the progress of the evil, and for maintaining within their respective limits, the authorities, rights and liberties appertaining to them.

Like Madison advised in Federalist #46, both he and Thomas Jefferson advised a state-level response to dangerous federal acts.  In 1798, neither of them even mentioned voting or lawsuits.

When Daniel Webster called on these same principles in response to military conscription plans during the war of 1812, he said:

“The operation of measures thus unconstitutional and illegal ought to be prevented by a resort to other measures which are both constitutional and legal. It will be the solemn duty of the State governments to protect their own authority over their own militia, and to interpose between their citizens and arbitrary power. These are among the objects for which the State governments exist; and their highest obligations bind them to the preservation of their own rights and the liberties of their people”

You are supposed to stand up resist, refuse to comply, and nullify unconstitutional federal acts – as soon as they happen.

All the money and time you throw at firing congress or winning in federal court will never, ever work – unless you start resisting right here in your state. And, that resistance needs to be your first response, not your last.