“Disunion is inevitable. What will follow, God only knows,” wrote Congressman Robert Hatton from Washington, D. C. on December 5, 1860.

Hatton was born in Steubenville, Ohio, but, early in his life, his family moved to Tennessee. He graduated from Cumberland University, then studied law there at Cumberland School of Law and established a successful practice in Lebanon, Tennessee, after passing the bar exam in 1850. He joined the Whig Party and was elected to the State Legislature in 1855. He unsuccessfully ran for governor in 1857. He was elected to the Thirty-sixth Congress in 1858 as an Opposition party candidate (the Whig party had collapsed), where he served as chairman of the Committee on Expenditures in the Department of the Navy.

Hatton believed that the Union should be preserved and initially opposed secession. However, after President Abraham Lincoln called for volunteers to invade the Southern states, Hatton reversed his position and formed a Confederate military unit, the Lebanon Blues, which became a part of the 7th Tennessee. Hatton was soon elected as colonel of the regiment, which was sent to western Virginia in July 1861.

In 1862, Hatton and his men were ordered to the Richmond area to stop Federal Maj. Gen. George B. McClellan’s drive on the Confederate capital. During the resulting Peninsula Campaign, Hatton served with distinction, and on May 23, 1862, he was promoted to brigadier general of the 4th Brigade, 1st Division, Army of Northern Virginia; this appointment was not confirmed by the Confederate Congress. Just eight days later, he was shot in the head and killed while leading his Tennessee Brigade at the Battle of Fair Oaks.

His body was returned to Tennessee for burial, but because Middle Tennessee was occupied by Federal troops, he was temporarily buried at Knoxville. On March 23, 1866, he was reburied in Lebanon’s Cedar Grove Cemetery. A statue of him was 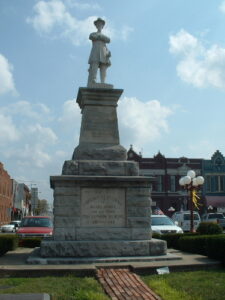 erected in Lebanon’s town square in 1912.

The Robert H. Hatton Camp #723 of the Sons of Confederate Veterans is named in his honor and memory.