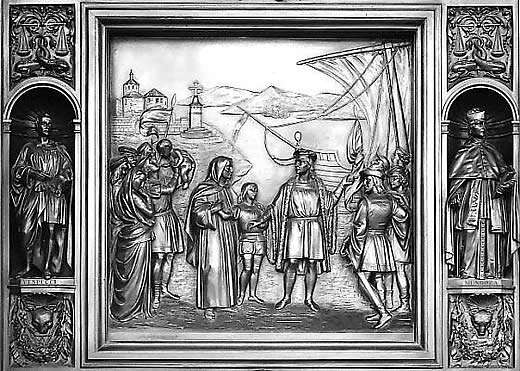 Credit: Architect of the Capitol
Media type: doors
Museum Number:
Annotation: The Columbus Doors that stand at the east entrance of the U.S. Capitol Rotunda are an imposing sight. They stand nearly 17 feet tall, and weigh 20,000 pounds. The artist was Randolph Roger, and his alto-relief bronze doors make a powerful statement about not only their subject, Christopher Columbus, but the importance of Columbus to the national consciousness. The bronze doors are curved, with a semicircular tympanum above two valves that are divided into four panels each. The details of each scene are finely modeled, and techniques of Renaissance perspective and different levels of relief give each scene a sense of depth. At the pinnacle is a bust of Columbus, surrounded by rays and oak leaves, signifying his rising to glory. A running border is ornamented with Indian headdresses and emblems of conquest, navigation, the arts and sciences, history, agriculture, and commerce. The four figures symbolizing the continents of Asia, Africa, Europe, and America indicate the entire world’s acknowledgement of Columbus’s accomplishment. Between the panels are sculpted heads of historians and others whose writings on Columbus’s voyage were the bases for the scenes depicted. The life of Columbus begins at the bottom of the left valve and continues in a clockwise progression. The panel that is pictured here is the Departure of Columbus from Palos (1492). It was from Palos that the Niña, Pinta, and Santa Maria set sail on August 3, 1492. This scene depicts Columbus placing his son Diego in the monks’ custody before his embarkation. The figures in the border are Columbus’s friend Amerigo Vespucci and Pedro Gonzales de Mendoza, the Archbishop of Toledo and Grand Cardinal of Spain, who had great influence at Court. This information is from the website of the Architect of the Capitol (http://www.aoc.gov).
Year: 1860