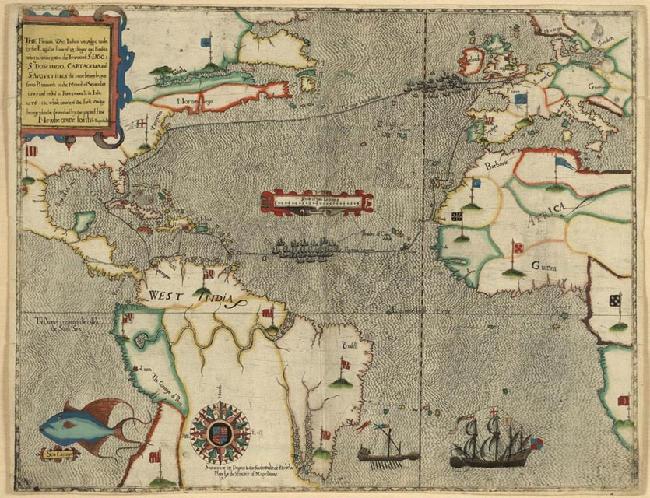 Credit: Library of Congress
Media type: map
Museum Number:
Annotation: Italian artist Baptista Boazio created these handsome hand-colored engravings to accompany A summarie and true discourse of Sir Francis Drake’s West Indian Voyage, published in London by Biggs and Croftes in 1588-1589. The maps are illustrated in fascinating detail with the fleet of twenty-three ships, as well as land battle plans of the English attacks on Spanish harbor forts. Animals, flags, crests, and compasses decorate the cartography. These Boazio maps are historically important not only for understanding Sir Francis Drake’s (1540?-1598) activities, but also because the four city plans represent the first printed view of each locality. The lead “voyage map,” charting the round trip from England, is captioned in English, while the accompanying four bird’s-eye views of ports are captioned in Latin. Drake sailed directly west from Santiago in the Cape Verde Islands off the coast of West Africa. The first port Drake reached in the West Indies was Santo Domingo in Hispaniola, present-day Haiti and Dominican Republic. This image shows the English fleet in the bay, and the infantry battalions attacking the town. The view of Cartagena, situated on the South American coast of Colombia, depicts the English infantry marching on the city. The view of St. Augustine is the earliest engraving of any locality in the United States. It shows the English fleet at anchor, while its infantry troops attack the Spanish settlement.
Year: 1589