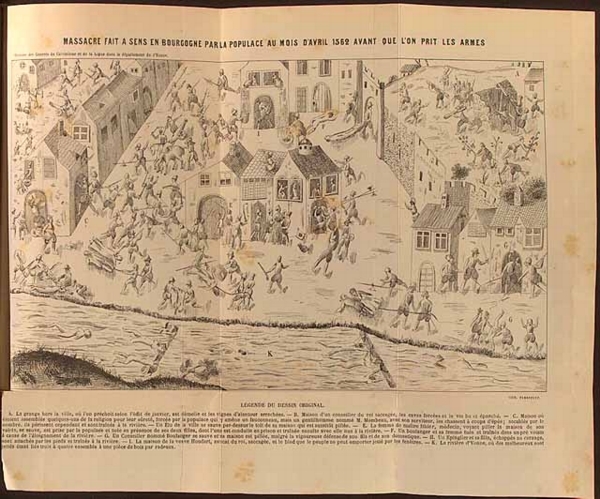 Credit: Library of Congress
Media type: engraving
Museum Number:
Annotation: The slaughter of Huguenots (French Protestants) by Catholics at Sens, Burgundy in 1562 occurred at the beginning of more than thirty years of religious strife between French Protestants and Catholics. These wars produced numerous atrocities. The worst was the notorious St. Bartholomew’s Day Massacre in Paris, August 24, 1572. Thousands of Huguenots were butchered by Roman Catholic mobs. Although an accommodation between the two sides was sealed in 1598 by the Edict of Nantes, religious privileges of Huguenots eroded during the seventeenth century and were extinguished in 1685 by the revocation of the Edict. Perhaps as many as 400,000 French Protestants emigrated to various parts of the world, including the British North American colonies.
Year: 1863