For several years the city has been subject to multiple protests—really, it’s somewhat ongoing there—that turn violent. This summer has been the ultimate example: 55 consecutive nights of mostly peaceful demonstrations mixed with an unsettling amount of domestic terrorism, mob violence, property damage, and assault on random bystanders. Now the Department of Homeland Security has deployed federal officers there.

How does Portland just keep letting these riots happen, this time for nearly 2 months? It would be generic to say that it boils down to “leadership”, but the criticism should be more exact.

It boils down to what leaders there think is worth condemning. Mayor Wheeler apparently doesn’t think violent riots fit that bill. For years he’s ignored or talked around them, serving as a profile in weakness, incompetence, and moral vacuity.

The severity of Portland’s situation began on May 29, in the early days of the George Floyd protest. A group of rioters broke into the Multnomah County Justice Center and set it on fire. The center is a large, multi-purpose legal complex that has hundreds of officers working and inmates living inside. The rioters tried, as they have through the protests, to intentionally block the exits so people inside couldn’t escape. The intention was clearly mass murder.

Already this should have set off alarm bells for Portland’s political establishment: here they had an attempted terrorist attack that, if successful, would have caused the same high-profile devastation as the Oklahoma City bombing or Florida nightclub shooting. It should have spurred the immediate entry of the National Guard, and closing of blocks around the Justice Center until order was restored.

Instead, there has been no coherent strategy or messaging. The Justice Center, now caked in graffiti and boarded up, has been ground zero for another 8 weeks of riots—with nightly standoffs between law enforcement and the vandals who try to burn it down.

That was only the beginning. The protests led to significant violence and damage in outlying areas, some of it directed in very targeted ways at the government, some more randomly at private citizens. Here are the main examples:

The Portland Police Bureau, which the mayor heads, has been in charge of policing the protests. There has been ongoing criticism from police union leader Daryl Turner that Wheeler handcuffs the agency from stopping the violence, for example by limiting its use of teargas and loud warning signs. Wheeler, in turn, criticizes agency practices.

A typical media statement from Wheeler goes like this: complain in abstract fashion about the violence, but fail to describe who is causing it (for example by using words like “rioters”, “anarchists” or “Antifa”). Then start criticizing the bureau, as if vaguely to suggest they’re the real problem. 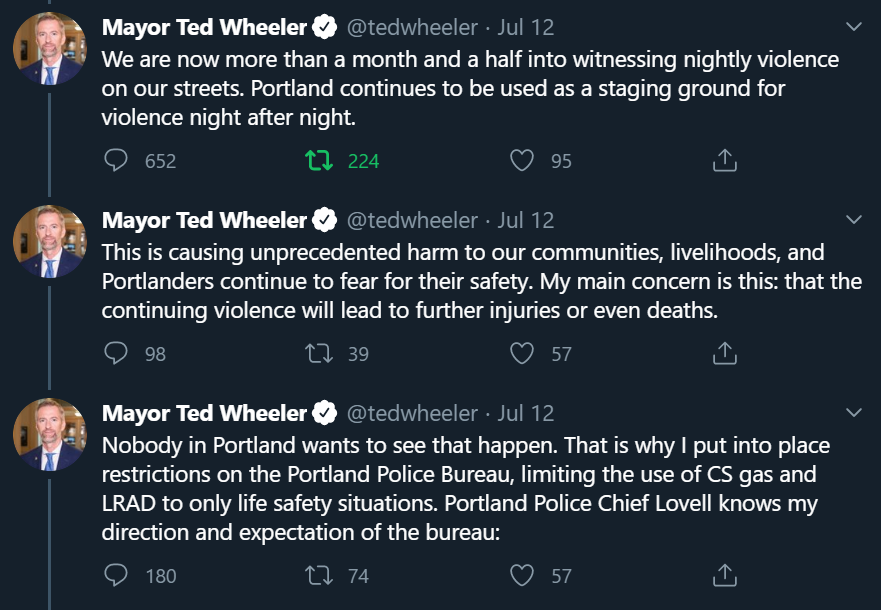 Wheeler has taken this tack even more towards federal law enforcement. There is precedent for sending federal officers to cities suffering from riots. Recent examples include 1968, 1992 (Rodney King), 2005 (when post-Katrina New Orleans spiraled into violence), and 2015 (when President Obama sent 1,500 national guardsmen into Baltimore).

The rationale for sending them to Portland is simple: rioters have tried for two months to burn down federal property. But Wheeler calls federal attempts to stop it illegal and dangerous.

There’s some validity to his point, as footage has surfaced in Portland of federal officers decked out in camo, hitting civilians and arresting people without citing a cause. But it begs the question of what else President Trump was supposed to do. The federal government shouldn’t tolerate ongoing nightly defacement of a major city, especially when it’s all there on tape, with local leaders like Wheeler doing nothing about it.

Beyond the legal and tactical questions—are federal officers justified in being in Portland? Should they use tear gas? What are legal and illegal arrest tactics?

My main question is philosophical. Why is it so hard for Ted Wheeler to call out violent rioting?

His city has put up with the same behavior for 8 weeks—rioters who disrupt the peaceful protests by setting street fires, throwing projectiles, tearing down fencing, and much worse. It should not be hard to issue statements saying this behavior is wrong.

But Wheeler has never done this in a clear way. So, the occasional riot is something Portland residents and businesses have just grown used to over the years. The worst thing this implies about Wheeler is that he might support the rioters—namely Antifa—and views their vandalism as the collateral damage needed to advance certain political goals. But it’s likelier that he just can’t think in clear terms: for example, by stating that riots are happening, explaining why they’re wrong, and ordering the police to stop them.

In fewer words, he is incompetent.